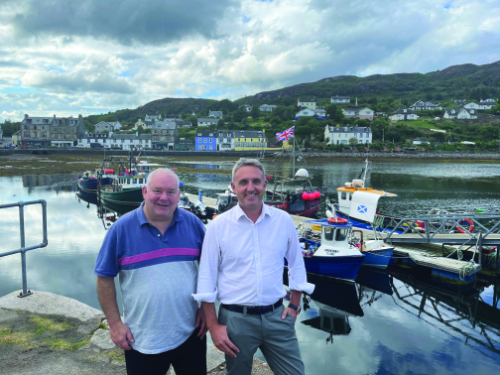 On the back of the Western Isles by-election, where we went from not standing for 15 years to a close second place, we now have more by-elections in Scotland! This time in the Kintyre and the Islands ward of Argyll and Bute and in the Buckie ward in Moray.

Kintyre and the Islands is a ward we currently hold one councillor – the leader of Argyll and Bute Council, Robin Currie. This is a crucial by-election as the Liberal Democrat-led Administration’s majority hangs in the balance – so we need as many people to go and help as possible.

Our candidate is local chef Kenny MacKenzie and as someone who has been with the Party for decades, we know he will make a great councillor.

If you can go there to either help canvassing or delivering, let James Calder know at james.calder@aldc.org and he will help direct you. It is an incredibly beautiful ward, as both James and Alex Cole-Hamilton can attest to having gone to kickstart the campaign early last week.

You can also donate to the local campaign here. With it being such a rural ward with many islands, it is difficult to deliver everywhere so donations can help us pay for postage.

You can also make calls to the Virtual Phone Bank on Connect using the following code: 55C035K-326607

We also have a by-election in Buckie in Moray, and Les Tarr is our brilliant candidate leading in a Liberal Democrat defence.

Les is planning on running a big campaign locally, so all support would be welcome.

If you can head over to Moray let James Calder know as well.

There is also a Virtual Phone Bank Code on Connect for Buckie using the following code: D68735G-375387