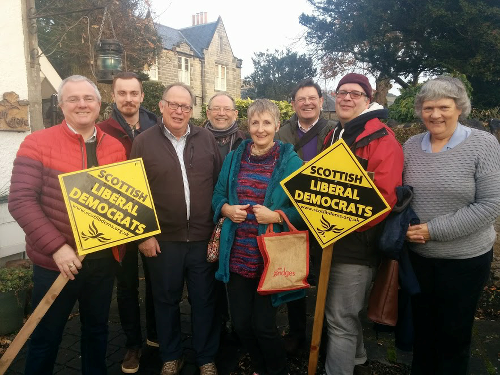 There was also a parliamentary by-election in Sleaford and North Wykeham constituency.

Our best result of the night was almost certainly in that parliamentary by-election.  Despite nearly all of the campaign clashing with the higher profile campaign in Richmond Park, Ross Pepper came from fourth place to third, doubling the Lib Dem share of the vote and winning more actual votes than the Lib Dems did in 2015.

In any previous period we would usually expect to get squeezed in a by-election like this one.  By either Labour, or UKIP, or both.  To end up as the only main party to increase our vote is a fantastic achievement. Ross and his team, led by Campaign Manager Ed Fordham and Agent Ian Horner, deserve a lot of credit for getting such a great result in such challenging circumstances.

Equally importantly, the campaign was designed to leave a good legacy for future local election success.  The team, which is mainly made up of new and young members, now has a load of canvass data and string local credibility.  ALDC will be continuing to support the team as they aim to hold and gain County Council seats this coming May.

Pippa Hepworth stood for us in University & Scotsforth Rural ward, Lancaster, and Peter Andras stood for us in Madeley ward, Newcastle-under-Lyme. They won 12.8% and 10.6% respectively. Both deserve our thanks for flying the Lib Dem flag.  In both cases they got very creditable results, have built a platform for future growth and both seem to have enjoyed their campaigns.

Unfortunately we didn’t stand in the other three by-elections being contested.

Our advice remains the same, stand a Lib Dem candidate if you possibly can, and then come up with an appropriate campaign plan to fit the circumstances.