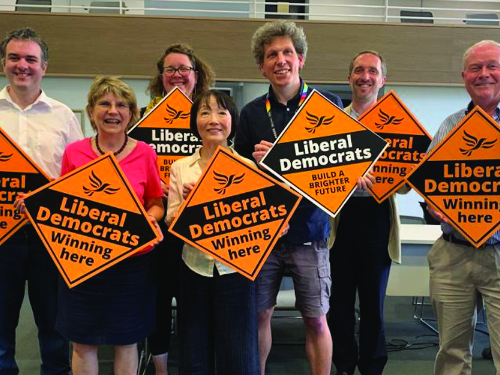 Thanks to the Hampstead Lib Dems for sharing their expertise on beating Labour and the Conservatives in London!

We’d hadn’t even finished our May election expenses when we found out we had a by-election.

It was in Hampstead Town ward, which had been Tory from 2014 – 2022, and where Labour had surprisingly won a seat in May 2022, without any campaigning. The new Labour Councillor, who’d obviously been assured he had no chance of winning, resigned straight away, and the by-election was set for July 7th, 2022.

Within 24 hours we established that Linda Chung, who’d had been a councillor there before, was keen to stand again. We debated for another 24 hours whether to go for it. Would we split the vote and let the Tories back in? We concluded it was a risk worth taking. We discussed our campaign approach – we were in third, in a split ward. It was hard to tell who we were switching and squeezing – so we had to attack both Labour and Conservatives!

We started with positive messages about Linda, her record of action, and her experience as a former councillor. We focused on Linda as a councillor you could trust, contrasting her with the Labour councillor who had walked away, and the sad state of the Tory party. Election day coincided with Boris Johnson’s resignation announcement!

To Labour voters we argued they could get both a hard-working councillor, and still have the Labour-dominated council they’d elected in May. To Tory voters we stressed Linda’s local credentials, and that voting Lib Dem would strengthen our hand as the opposition to Labour on the Council.

We did four things we’d learnt from Cllr Nancy Jirira’s successful by-election in 2021:

We did some new things too:

We won with an 18.6% swing to us, and a 12% swing away from both Labour and the Conservatives. Our last by-election gain was in 2008 – we’re hoping it isn’t quite so long before our next one!