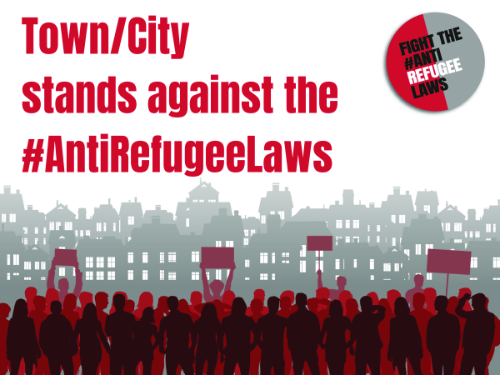 The below template Council Motion has been produced by Asylum Matters.

It calls for Local Authorities to commit to sign their Fight the #AntiRefugeeLaws pledge; work with local groups and people with lived experience of the asylum system to identify ways to mitigate the impact of the anti-refugee laws; and commit to becoming a Council of Sanctuary.

A full set of resources from Asylum Matters – including social media graphics and a template press release – can be downloaded here.

Council Motion from Asylum Matters: Defending the Right to Seek Safety from War and Persecution

(i) [Local Authority] is proud of our history of welcoming people seeking safety in [Local Area];

(ii) there are significant problems with the UK asylum system that affect people in [local area], including a record backlog of cases awaiting a decision, a de facto ban on working, and enforced poverty and homelessness;

(iii) the Nationality and Borders Act does not address these issues, and has instead created a two-tier system, punishing people seeking safety based on the journeys they make;

(iv) under these laws, people seeking safety will be criminalised and threatened with removal to Rwanda;

(v) people will be warehoused in large accommodation centres, segregated from communities and denied support;

(vi) many recognised refugees will receive a temporary and precarious status;

(vii) over 400 charities and faith groups have signed a national pledge to ‘Fight the ‘Anti-Refugee Laws’, including [XX] local groups.

(i) everyone’s claim for asylum should be treated equally and fairly;

(iii) these are fundamentally ‘anti-refugee’ laws that undermine internationally recognised rights for people fleeing war and persecution to seek safety;

(iv) these measures will create ever-longer delays in the asylum process, lead to greater poverty and homelessness in [local area] and will undermine people’s ability to rebuild their lives;

(v) people seeking safety should be housed as our neighbours and as a part of our communities;

(vi) the UK needs an asylum system that empowers people seeking safety to rebuild their lives and enables communities to welcome them;

(i) defend the right to seek safety from war and persecution in the UK and sign the national ‘Fight the Anti-Refugee Laws’ pledge;

(ii) call on the UK Government to withdraw the UK-Rwanda agreement, repeal the Nationality and Borders Act, and work with Local Authorities and communities to build a refugee protection system that treats all people with dignity and compassion;

(iii) work with local organisations and people with lived experience of the asylum system to identify ways to mitigate the effects of these measures in [town/city];

(iv) Join the network of cities and towns which promote the inclusion and welfare of people who are fleeing violence and persecution and become a recognised Council of Sanctuary.