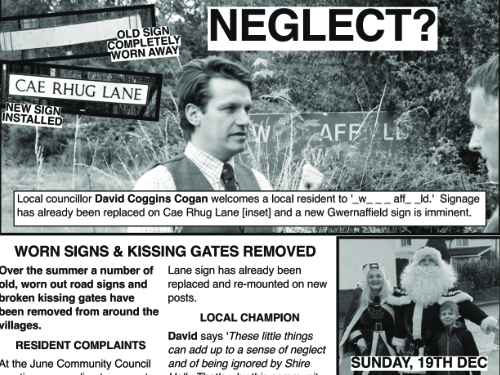 Cllr David Coggins Cogan gained a seat from the Conservatives in May 2022. He shares some tips for community campaigning in a rural Welsh ward, and explains why he regrets not knocking on more doors!

When I first moved into Gwernaffield in North Wales in 2017, I knew I wanted to run for the County Council. This was a newly redrawn two-member rural ward with a broadly static, but ageing population, containing five distinct villages. Although there had been some Lib Dem success in the early 2000s, it was now one of the most solidly blue wards in Flintshire.

Although my fellow Community Councillors were horrified, all the residents I spoke to were delighted. Older residents who were true blue Tories respected my commitment to keeping them informed. As a community councillor, I didn’t have many successes to laud, during my four-year stint as a community councillor, the only solo success I really achieved was putting on a Father Christmas procession during the first Christmas lockdown, and replacing a missing bin! However, those disparate successes aside, what mattered was regularly keeping in touch with residents. I was amazed at how many times during lockdown, I would get a call from residents when I hadn’t been able to deliver a newsletter in months. It was because my newsletter were kept and stored by residents. Because of my fantastic prose and insightful comments on the failings of the British politics? No. It was because I kept them up to date on the Number 6 bus. I reminded people not to put out ‘side waste’ next to their bins. I also kept up a regular schedule of a newsletter every 6-8 weeks, lockdowns permitting.

Our small team and the logistics of delivering a large, rural ward meant we were not able to dedicate as much time to canvassing as we should have. Instead I poured all my efforts into producing leaflets and direct mail. We also benefited from ALDC’s Local Election Appeal grant, which sent targeted letters to key postal voters. This ‘strategy’ worked for me personally but we failed to get my running mate elected, and I haven’t contributed what I ought to have contributed to the local party in terms of data collection. The lesson is, although I won, I won alone when I could have achieved victory with my running mate, electing another Welsh Liberal Democrat to the County Council for five years.

If you want the best possible chance of success, do better than me and learn from my mistakes. Canvassing connects you with voters. Canvassing makes you more aware of the issues. Canvassing recruits activists, poster sites and endorsements for literature. Canvassing works!