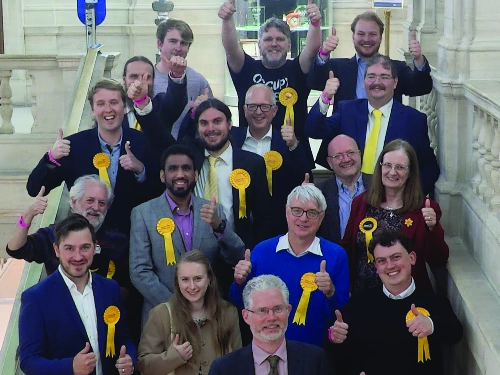 Pick a ward and win it is a well known ALDC motto. Here is how Southampton did just that. Campaign manager Colin McDougall reports back.

Our last election victory in Southampton was in 2010 and the subsequent years have seen enormous effort for zero reward. We were sustained by the knowledge that we had been strong in the city for a number of years before 2010 and once even formed the administration. However, that hope had started to fade as defeat followed defeat. Some of these defeats were due to bad luck but the majority were due to our own errors. By 2018 the party morale was low although our membership/activists had grown with the general Brexit bounce.

Firstly, we had to accept the politics of our city. It is a tough contest between Conservatives and Labour so our vote gets squeezed. We had to think hard about our best chance for victory across the 16 wards.

The second key decision was to target our efforts into one ward. We focused our attention on a safe Conservative ward with no history of campaigning.

Our third focus was to fundamentally improve our campaigning capability. This meant accepting we needed to learn and find people who could train us. We committed to using minivan to gather data, fired up Nationbuilder to generate petitions and emails and used the ALDC literature schedule in full including street letters, Christmas cards and direct mail.

Armed with this improved capability, we saw our vote climb to within 16 of the Conservatives in 2019. We had no idea that we were having such an impact, so bad luck again! Then our luck got worse. COVID saw elections cancelled in 2020 and then a huge Conservative bounce in 2021. We were back to being hundreds of votes behind and feeling rock bottom. We rallied ourselves to have one last go, and won big.

Lessons we learnt were