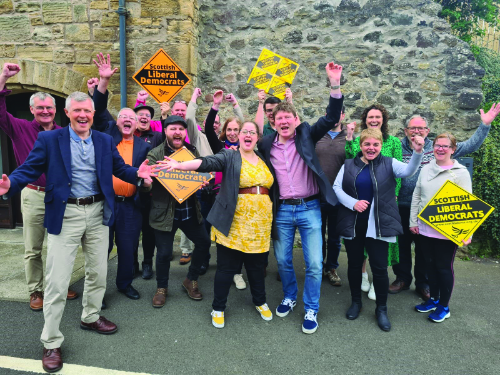 In my local Party of Dunfermline and West Fife, Dunfermline Central was always historically a strong ward. However, due to a variety of reasons, in 2017 the ward was lost with only 6.9% of the vote and in seventh place, leaving us with only one ward held by myself after that election.

With Scottish local elections only taking place every five years, that left us in a situation where we needed to rebuild, and the first step was finding a candidate for 2022 (this year). We did this in early 2019, with Aude Boubaker-Calder being selected. We began the groundwork at the European elections and continued – but in November 2019 due to a Conservative resignation, a by-election was called.

At the beginning of the campaign, we were managing our expectations. Going from seventh place to winning was always going to be a tall order, so our aim was to get ourselves into a competitive position. With the General Election being called during the campaign, we also had to temper expectations as there was less help from our neighbouring local parties than we would normally have.

Nevertheless, we saw this as an opportunity. Due to Scottish local elections being Single Transferrable Vote, in a normal election we would just need 20% of the vote in first preferences – so we were aiming to achieve that so we could put ourselves in a winning position for 2022.

At the count we found ourselves coming second place – and losing to the SNP by just two votes! However our candidate Aude took this in her stride – and we worked on a plan.

With us coming from seventh place to within two votes of winning, we knew that the plan to use the by-election as a springboard to win was definitely on track – so we now had to plan out the next three years (which of course needed modifying due to Covid restrictions from time to time). There were a few key elements to this:

Messaging – Aude already had a great grasp of the local issues, but we found two messages really worked on the doorsteps after the by-election. The squeeze message – with a brilliant bar chart – worked wonders! By April 2022, everyone was repeating this back to us and it was on absolutely every bit of literature. Aude also had a great strength of being local to the ward which we also made good use of.

Data – We had a reasonable amount of data from pre-2017, but the by-election provided a great opportunity to build this up. In the intervening period, Aude focused relentlessly on building up enough data so that by the end of March 2022 she had enough for a decent shuttleworth to get out the vote. This meant regular canvassing over a long period of time!

Literature – It was an important aspect that while Aude was not elected, she behaved as though she was a councillor – regular Focuses, direct mail, street letters and taking on casework as a result of this was all important. We also built up Aude’s email list and made sure we tagged people by voting intention so that as we got closer to the election we could target emails too!

Taking opportunities – Aude was excellent in finding opportunities to boost her profile – such as standing as the Scottish Parliamentary candidate locally in 2021. With this allowed her not only increased literature exposure but also considerable media exposure, both local and national, and print and broadcast.

In 2022, after three years of hard work by Aude and the team, she won, topping the poll in Dunfermline Central with an increased share of the vote from her 2019 result. The by-election really marked the start of her campaign proper, but as a result of the hard work both before and after this, she has now joined me in Fife Council.

By-elections are great opportunities, and they can take you from a low base to winning if used properly.