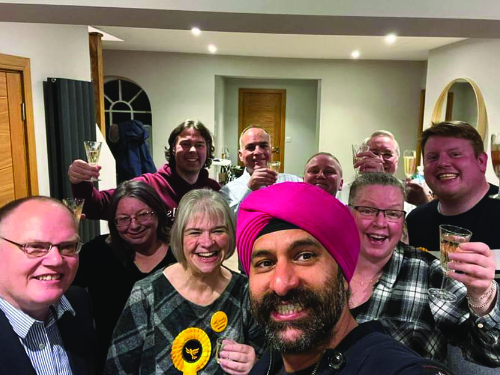 In my role with ALDC, I have the privilege of supporting and watching campaigns develop across the South East. Liberal Democrat parties across the region are working so hard to provide better for their communities and to get Lib Dems elected at all levels of Government.

The team in Surrey Heath are a brilliant example. They work hard all year round, they champion our Liberal values and when there is an election they spring into campaign mode and absolutely chuck the kitchen sink at beating the Tories.

On Thursday the 14th of April this year, there was a by-election in the seat of Bisley and West end, it was to be a straight fight between them and the Tories in a classic two horse race. I asked one of their campaign leads, Kel Finan-Cooke to tell me  a little more about the Campaign and what they did to win.

“Liz Noble took the long-standing Conservative seat of Bisley and West End with a staggering 66% of the vote share and an incredible 24.65% swing on 14th April.

The team in Surrey Heath changed things up for this by-election and took a risk with slightly more aggressive anti-Tory literature, and it really paid off.  We produced the now infamous “blue leaflet” with a simple “thinking of voting Conservative?” on the front and back which opened to an A4 page describing some of the failings of the Tories in administration locally. Residents were astounded when they learned the extent of the financial incompetence within the borough. This leaflet was followed up a few days later with our positive ‘yellow leaflet’ and we had many residents comment that they enjoyed the literature style and timings.

When I say we did a lot of work in this election, I am not exaggerating. 4,400 canvas attempts and over 2,500 voter contacts made during the campaign period alongside the 9 pieces of unique literature that landed on people’s doormats, the Surrey Heath team worked their socks off in the ward and residents could actively see how much work had been put in. The Lib Dems are known for this kind of active and engaging campaigning across the country. Where we work, we win.

In contrast, the Conservatives were incredibly complacent during the campaign. We rarely saw them out on the doorstep. Their candidate was a sitting parish councillor and they stuck to their usual campaign strategy of one or two template leaflets with photos of their candidate with Michael Gove – a tactic that they still don’t seem to have understood is actively turning people off in Surrey Heath, connecting the local Conservative party to the national party at a time where trust in the Government is low and sleaze and scandal regularly appear in the headlines.

Our candidate, Liz, was a well-known community champion in the area and had been tireless in her work throughout the pandemic in her efforts to provide for her community. Liz was also well known for campaigning on traffic and road issues and a co-founder of the village food bank. She was the natural choice and when residents of Bisley and West End discovered there was to be a by-election, Liz was contacted by many residents to make sure she was going to throw her hat in the ring! Their support and votes for Liz pushed Surrey Heath into “no overall control” which was such an excellent result.

The count was thrilling and the Conservatives physically stopped counting after five minutes as it became obvious almost immediately that Liz had absolutely smashed it. Even the author must admit to feeling slightly sorry for their poor candidate when at the end of the count, it took ten minutes longer to bundle and confirm Liz’s ballots than his!

Roll on May 2023 and our next GE – Surrey Heath is ready for change and we will all keep fighting for it.”