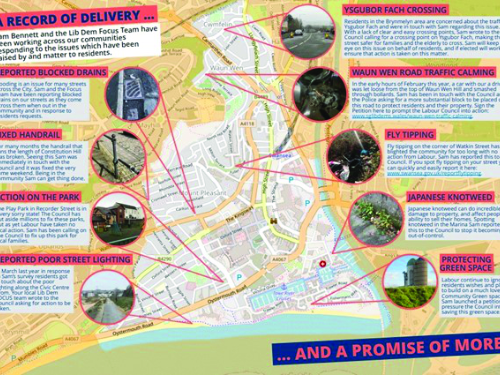 ALDC’s three leaflet is the ideal leaflet programme for the election campaign and a core part of the campaign is the map leaflet. See here for this year’s template.

What makes map leaflets so effective? Quite simply they allow us to demonstrate our year round activity in a simple, visual format. We know Lib Dem councillors and candidates win because they are local champions, working hard for their wards. Demonstrating that record is key to making our message effective.

Maps draw people in – you can’t help wanting to look and see where you live.

A good map leaflet will demonstrate local activity across your area and year round (if there is snow, don’t forget to get out, do something and take a photo – nothing shows activity as well). You can even replicate it online. There are a number of different ways to do a map leaflet, so let’s take a look at some examples.

In last year’s county elections, Kirsty Lord was defending a small majority. She had a fantastic local record but the nature of her county division didn’t suit a single map leaflet, with some completely different parts of the division. The team decided, therefore, to do smaller leaflets focused on specific parts of the division. This meant that there could be a focus on very specific actions.

The team used a handwritten style, overlaid on a colour map, to produce an activity leaflet with a sense of real local connections.

In Swansea, a local government boundary review has created a brand new single member ward called Waterside. It is being fought hard by Sam Bennett, who was a by-election candidate for a preceding ward which covered a larger area.

With a new ward, it is important to create some sense of identity and to define the ward. Sam has done this well with a clear, colourful map.

The Waterfont Map also use action related pics well, while ensuring they do not obscure the actual area of the ward.

Cllr Caroline Leaver says: “I have a map on my office wall, on which I mark up casework as I go. This means that we have the information for the map leaflet at hand. It also lets me see if there are parts of the ward in which I haven’t done enough.”

The map leaflet is produced as A3 on a two colour Riso, so clarity of design is important. The number of photos are limited, but the full team is in a photo and the record of action is emphasised by a Focus montage.

In Cardiff, Group Leader Rhys Taylor has replicated the map process on Facebook, to good effect.

The approach really pushes how hard the team have been working, is visual and links back to the ward’s website page.

It’s important that you use the right maps and give the correct attribution. Read our advice article here to find out how to use maps in a compliant way.