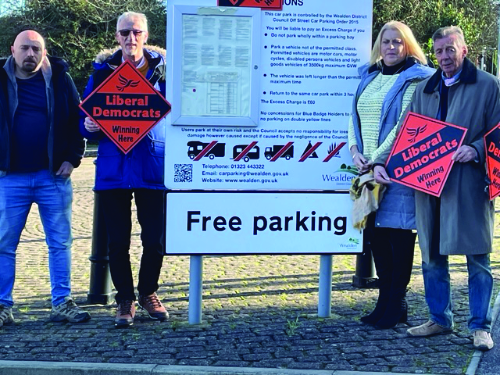 Thursday 10th February was a great night for the Liberal Democrats, with the party winning all three principal council by elections. Nowhere was more exciting than the Wealden Borough Council by election in Hailsham South.

The seat had actually been fought in a Hailsham Town Council by election (on the same boundaries) on the 2 December, when the Conservatives held the seat.

Wealden local party chair, and co-Campaign Manager James Partridge takes up the story. “The town council by election was one of three that day and we gained another ward but not South. However, we knew the district by election was going to come soon. Our candidate in December, Anne Blake-Coggins, wanted to continue and the local party decided to throw everything at the by election.”

Before Christmas, the team got out a thank you focus and a letter to postal voters. After Christmas, canvassing started in earnest.

Agent and co-Campaign Manager Stefan Petszaft continues the tale, “Canvassing was the big difference between December and February. In the town council election we just relied on literature.

“This time, we knocked on every door and had time to go back to outs. In total we did one and a half sweeps across the ward.”

On the literature front, the team put out two more focuses and a letter to postal voters.

As the campaign closed down towards election day, things started to hot up.

“Suddenly, the Tories were very worried,” says James. “One of the big issues was the failure of Wealden Council to adopt a local plan. We heard on the doorstep that the Tories were claiming it was the Government’s fault, not theirs. We designed a card holding them to account for their failure and delivered it in a single day.

“The Tories really worked hard in the last two weeks and we knew they were very concerned because they started to complain about our campaign. ALDC advised us to do a targeted blue letter and push on. They also gave us a fighting fund grant.”

On eve of poll we put a ‘black cross’ card to our Shuttleworth.

“We drafted in old friends and delivered the whole ward in six hours,” Stefan said.

“On Election Day we ran a small but full version of a get out the vote campaign – telling until about 7pm, updating Connect with the numbers every hour, setting up and using Minivan to chase voters (we found it worked well and was updated every time a batch of numbers was entered).  We continued knocking up until it got too dark and cold to continue.”

The result was clear, with a huge swing to Anne (swing calculated from the last district election).

“What was particularly pleasing was this was the second by election in which we defeated that particular Tory candidate,” comments Stefan.

You can find some of the Hailsham literature here, which is a great example of a strong message.