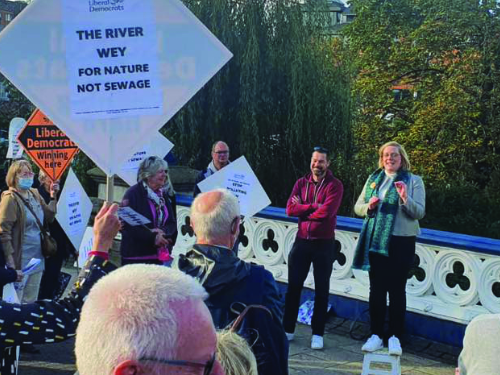 Cllr Abi Baker, Organiser in Guildford, tells us all out about how they used protests to campaign.

The Liberal Democrats are the party that stands up for our local communities and helps them get things done. Sometimes we must take to the streets to make our voice and our position known and that means it is time for a protest.

Protests can come in different forms, sometimes it’s a march, sometimes it’s a gathering in a public place, and sometimes it’s part of a larger event, like Pride or the Stop Brexit Marches many of us attended. It can sometimes be difficult to know where to start when planning something like this so I would like to share a couple of things we have done in Guildford that worked well for us.

When the Sewage scandal hit, we found out that the River Wey in Guildford was one of the worst effected water ways in the country.  Our members, activists and residents were angry, and we knew we had to do something. We organised a protest on a bridge in the town centre for the following Saturday and promoted the event through email and social media to not only our members, but the public in general. We produced leaflets, made placards, organised who would be addressing the crowd and ensured we would have as many of our local councillors present as possible.

We had candidates and councillors from other political parties attend, but we had made sure it was very clearly a Liberal Democrat event.  We found that by being welcoming to our political opponents – our PPC even had a picture with them – we reached more people than if we had tried to cut them out.  It is also possible that this will help with our switch and squeeze campaigning in the future. Another reason I mention this is to demonstrate why it is so important that you remember your Lib Dem badges, signs and any materials you are handing out are branded.  Whilst you are doing something for your community, you want people to know that you did it.  You need to ensure that if you organised it, you get the credit and show others attended your event.

More often than not we cannot plan a protest months in advance, they typically need to be reactive so I would like to share with you some things to think about/consider when you next have to plan one in your area.

What are you protesting?

This may seem obvious, but it is important to ensure you are protesting something that the public care about. Also, it is worth checking that your local Council Group or the Federal Party haven’t released a statement or voted against (or for) what you want to protest.

Why are you protesting?

Something to consider before holding a protest is what are you going to do to follow it up.  Is it part of an ongoing campaign? Is it going to kickstart a campaign? Is it in response to a Council/Government decision? Holding a public protest and then not following it up with anything risks looking like virtue signalling and not real action.

Who do you want to be there? The short answer is as many people as possible, but if you don’t promote the event they will not come.  Be sure to invite local or national press – and follow up with them after the event.  It is important that you have as many councillors, if you have them, present, as well as local activists and your PPC where ever possible.

Is this clearly a Lib Dem Initiative?

It is likely that some of your political opponents will attend, so make sure that you are owning the narrative.  Don’t be shy about letting people know this protest was the idea of the local Lib Dem party. People will still attend if it is something they care about. So brand your materials and pre-event promotion. You can also get your PPC or a well-known Councillor to address the crowd – and don’t forget your badges or stickers.

What do you need for the day?

Share any pictures or videos that you took on social media, do this a couple of times during the week after the protest to let people know how it went. It is also worth writing a piece for your website and including a link in any email you send out that week too.

Someone would follow up with the local press and you should send out a press release within a couple of days of the event.

If you decided to do a petition, then let people know what is going to happen with it in the future.