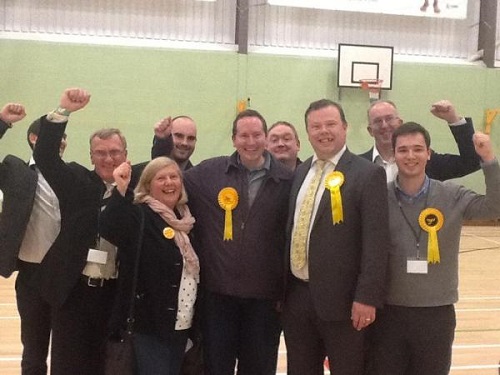 Cllr Hannah Perkin, Assistant Regional Development Officer for the South East, tells us all out about how they won in Swale.

In 2017, Faversham, a small market town in the Borough of Swale in Kent, elected Antony Hook as their Lib Dem County Councillor. The first Lib Dem to be elected in Faversham for a long time.

In the following two years, Swale Lib Dems knocked on thousands of doors and delivered more leaflets than most of us had had hot dinners. In 2019 this led to the election of eleven town Councillors, taking control of Faversham Town Council and five Borough Councillors who entered into a five party Coalition to take control of the Borough Council from the Conservatives. One of those seats, was the seat for Priory Ward. A ward that had been held by the local Councillor Mike Henderson on and off for 30 years and was held by a new Councillor following his retirement.

In 2020 this Councillor went independent and in 2021 he resigned from the Council entirely. This left a vacancy in Priory, a single member ward, and Mike, a committed public servant for the ward, stepped out of retirement to fight the seat and regain the ward for the Lib Dems.

This was a short campaign. As a local party we had a 4-week run up to the election. Mike had only recently been re-elected to the Town Council in a by-election following a separate resignation in May of 2021. During that election we had canvassed and worked the ward during that election so were on a good foot to start on. The one considerable difference was that this time the Greens were strongly fighting the election too, so we were going to need to get out in front of them. Labour had polled very poorly in recent elections with the Tories coming second in every election since 2017.

Within 24 hours of the vacancy being announced a campaign team was created to look at messaging, budget and literature plans and within the first week we had our Canvassing leaflet designed and printed and a A4 in the pipeline for the following week. Canvassing began again in earnest in week one with 15% of the ward knocked by the end of the week. By the end of week 2 roughly 25% of the ward had been knocked and everyone in the Ward had received an A4 leaflet.  The rest if the campaign literature consisted of an A4 hand addressed postal vote blue letter with an A5 insert leaflet, an A3 full glossy Focus, a further A4, a targeted personal squeeze letter, a week of polls leaflet and two separate “knock up” leaflets for our get out the vote campaign on polling day. Overall over 6,000 leaflets hit the doormats, some residents would have received 9 written communications from us during the Campaign period and the local party activists canvassed the ward twice. The team had all been trained to use Minivan, meaning that we could easily keep our data and upload it to connect without having to sit down at the end of a session and use up valuable time collating everything when there was delivery and all-important sitting down to do. A lot of paper and boot leather was used but most of all a lot of listening and chatting with residents was done and casework completed as a result. Being back on the doorsteps feels especially good having not been able to reach out in person to residents for so long.

The power of 3 and repeated messaging

There’s an old adage in the Lib Dems that when you are bored with your messages then the people you are trying to reach will have just about remembered them. Consistency of message is absolutely key bread a butter stuff for pavement politics. Every single bit of literature that we put through people’s doors either had “Mike’s 3 pledges”, or “3 things to remember”. These pledges and things to remember clearly articulated Mikes vision and commitment to the ward.

There was of course also a bar chart from the recent Town Council election where Mike received 51% of the vote followed by the Tories on 33% and Labour on 16%.

The Green Party were not our friends

The Green Party did not stand a candidate in the Town Council election in Priory Ward fighting the Lib Dems in another ward instead. In this election, by the end of week one they had delivered an A3 and would go on to deliver a further 2 A4 leaflets and some letters, they were clearly out to run a full campaign. Their literature attacked the Lib Dems stating it was a choice between the Green Party candidate and “the same old, same old crew that have nothing new to offer” falsely claiming that the Liberal Democrats are “told how to vote at the Borough Council” and using a seemingly completely fabricated line graph showing them in poll position.  In response, we focused on running a positive campaign focusing on what the Lib Dems had achieved, the work that Mike has done for the, a commitment to carrying on and building on that work and getting out on the doorstep.

Get out the vote

Early contact with postal voters is absolutely key to any election. After all, they have the opportunity to vote way before the final days of the election. We obtained a list of postal voters from the local authority, something all political candidates are entitled to and used it to write letters and to go and speak to them early on in the campaign. It is worth remembering that even though some postal voters will vote early, some may even take their ballot to the polling station. We always continue to leaflet houses with postal voters after they have received their ballots and will also aim to canvass them after they have received their ballot to see if they have already voted or not.  By polling day itself we had a list of 800 potential voters that we needed to try and speak to to make sure that they used their vote and to discuss any reasons why they may not want to. This was an all-day effort with door knocking beginning at 09:30 am and continuing through until the evening. ALDC say there is nothing more important for getting out the vote than a good polling day operation. To run a good polling day operation you need data! So, go knock doors.

Mike was happily re-elected to the Borough Council increasing our local party presence to 4 Councillors. The election took good communication, volunteer effort, data, consistent literature and a lot of hard team work but we did it. Now the work begins to follow through on our election pledges and be the community champions the Lib Dems are known to be.