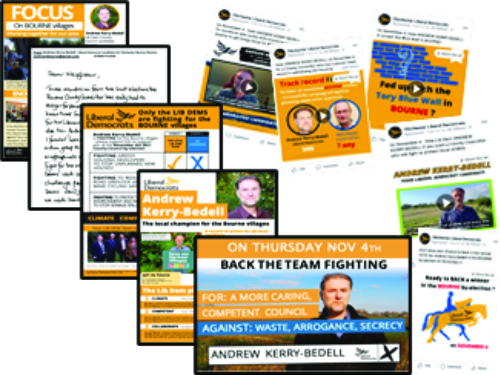 Following a successful set of county elections, and a district council by election gain from Labour, the Chichester team faced an Autumn by election for a West Sussex County Division in Bourne.

The Division borders Chichester Harbour and covers two distinct areas – Southbourne, where we have district councillors, and Westbourne, where the Conservatives are intrenched.

In May, the Conservatives had won comfortably:

However, the team felt this was a winnable by election and immediately got to work (and applied to the ALDC Fighting Fund).

Jill Hilliard, the campaign manager, takes up the story:

“We had a great candidate, who was respected locally with a known track record of action (not words) and positive results for his community.”

“The Tories fielded a candidate the Lib Dems defeated in the neighbouring Chichester West Division in May 2021. The Greens and Labour put up candidates but the Green campaign was lacklustre and Labour was nowhere to be seen – they even tweeted support for Lib Dems!”

“We followed the classic campaign and had lots of communication on our priority topics, with consistent proposition delivery.”

“We focussed on and repeated x 3 local issues in all literature. We kept true to our key topics: Climate, Competent, Collaborative. In the last three weeks, we pushed hard on social media.”

County Councillor Kate O’Kelly said: “We did lots of canvassing. Knock & drop surveys proved a powerful tool. We hit postal voters hard and concentrated on building Lib Dem and candidate support, and collecting GOTV information. We managed to speak to 70% of those who cast a vote by election day!”

“We had an organised central campaign, with monthly team meetings and weekly meetings with the manager. We built a sound logistic chain but remained flexible to change. We were able to respond to growing anger over the repeated release of sewage into the harbour.”

“The campaign had strategic clarity and was data-driven.”

“We also created a fabulous support network with delivery hubs, local champions to co-ordinate volunteers and support from outside the division. We used an active WhatsApp group to “excite the troops”!

“On election day we had telling and a tremendous ‘Get Out The Vote’ operation.”

“The final result was amazing. The Lib Dem share of the vote jumped by over 22%!”

“We believed we could win – so we did! Afterwards, we celebrated with cake and thanked everyone personally.”

Excellent; well done to all.