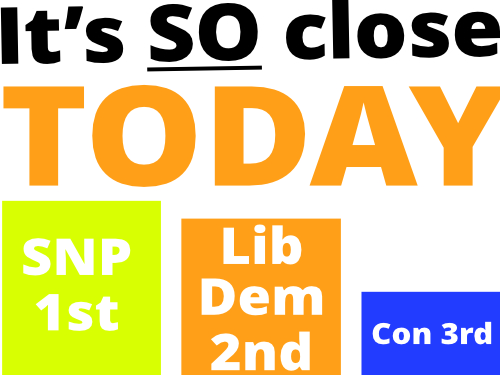 Squeezing weaker opponents is one of the major tools in the armoury of a winning campaign. While in England we have various levels of local government as well as parliamentary elections, in Scotland (and Wales too) we also have devolved parliamentary elections to add to the mix. We have found that a key part of success is crafting winning squeeze messages.

However, an often overlooked second purpose of squeeze is to also show us to be a credible challenger. As a smaller party we all know we have to work much harder to get elected, and it makes it all the more easier for us if we can cut through to the electorate that we have a serious opportunity to win.

In Scotland, the main dividing fault line in recent years has been the attitude towards independence. With the Scottish Liberal Democrats being on the side of remaining in the UK (with the caveat of pushing for a Federal system), we are clearly on the opposite side to the argument as to the SNP. However, both Labour and the Conservatives are also fighting for these votes.

Recent success stories in Scotland have relied on making use of squeeze, generally to show us as the credible challenger to the SNP.

In Edinburgh West and North East Fife, we hold UK and Scottish Parliamentary seats as well as electing councillors in most wards within those seats. Indeed, in Edinburgh West, Cllr. Kevin Lang and Cllr. Louise Young gained our best council election results in Scotland through this method. A key part of our messaging there has been squeeze. This also benefited us on the regional list part of the Scottish election this year in the regions both these seats are in.

Outside both those seats, we have also seen some of our best council by-election results making smart use of squeeze. When electing Cllr. Jill Tilt in Wick and East Caithness this year, we used our Scottish and UK Parliamentary results in the seat that ward was in to take us from 9th place last time to winning. In 2019 in Dunfermline Central, Aude Boubaker-Calder came from 6th place to within 2 votes of beating the SNP partly by using the local bar chart from the European elections to show our credibility – and now Aude has an even better bar chart showing us only 2 votes from winning to hopefully propel her to victory next year.

And Cllr. Liz Barrett proved that it is easily possible to win in a ward without an obvious bar chart. After narrowly losing (coming third a three-way marginal) in 2017, she came back to win a great by-election win last year. Her squeeze message – that she was only 29 votes away from winning – resonated and was repeated back at the doorstep!

We must note that other parties can and will be ruthless with squeeze messaging. The Conservatives have been particularly successful with their national squeeze message that they are the only strong opponents to the SNP (clearly misleading but unfortunately effective). This has translated into success for them at the Council level.

At local level however, if we can get a strong squeeze message that can cut through, there are great opportunities to win. This counts for Scotland, Wales and England.