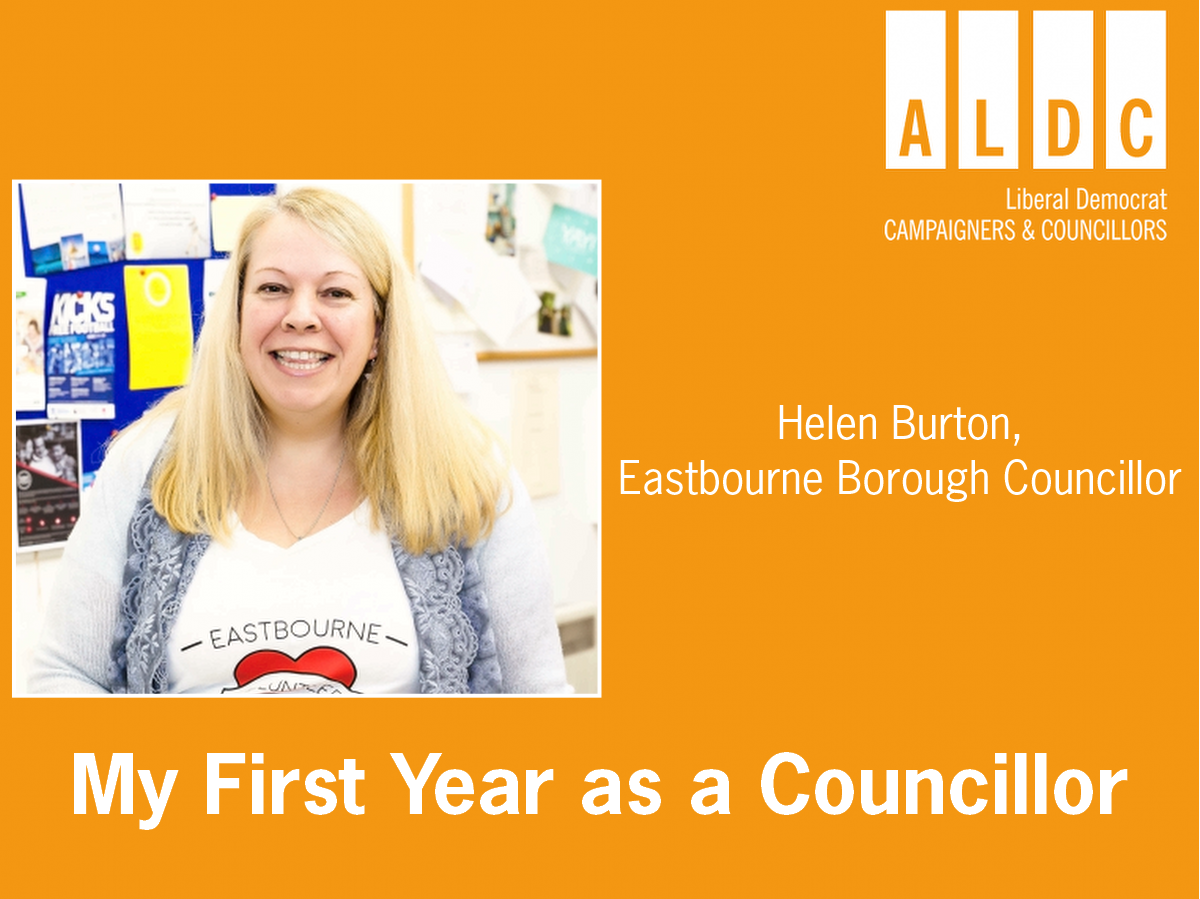 It’s been a year since Liberal Democrats across the country celebrated one of our most successful election results. For many this year has been a first in the role of a local representative. As we near next May’s elections it’s worth looking back at the year through the eyes of a newly elected councillor and hear about the challenges, surprises and realities of the role.

Below you will find Helen Burton’s story.

I can’t believe it was a year ago I was elected as an Eastbourne Borough Councillor, the time has absolutely flown by. What a year it’s been, and who could have imagined a year ago that I would be writing this during lockdown in the middle of a pandemic, a crisis affecting local councils across the country?

I’ve learned a lot during the last year, not least that there is often a lack of understanding about what the role involves and a distrust of anyone who considers themselves a politician, local or otherwise. As someone who has been a community campaigner in Eastbourne for many years, some people’s change of attitude towards me was shocking. As a social entrepreneur, my community interest company Volunteers Network has been supporting the community locally for years. We produce a local community newspaper and run a library. We try to make it easy for residents to connect with the services they need and support residents in many different ways. Because of my work organising this, and an ethical lifestyle column I wrote in the local newspaper for several years, a lot of people in Eastbourne know me, and up until standing for election, feedback from the public was overwhelmingly positive. As soon as I slapped on a rosette though and stood as a candidate, that all changed. During the local elections, I was relentlessly targeted by opposition trolls online, and people who had supported my work for years suddenly withdrew their support.

I learnt that we have an ‘us and them’ attitude towards government in this country, and as soon as I was elected, I became one of ‘them’.

The elections happened at the same time as finally getting the keys to the library my team and I had been fighting to save for the previous two years. As a single mum of a child with special needs, finding time for campaigning wasn’t always easy but I had the support of my family and friends and managed to juggle campaigning with re-cataloguing 7,000 books at the library and getting it ready to re-open. I worked well into the evenings and all weekends for a month, on top of my usual full schedule, and by the time Election Day came round I was exhausted. Literally, as I had, as usual, pushed myself to the extreme and ended up in hospital suffering from exhaustion and dehydration.

My colleagues looked after me and I was on light duties by Election Day, just delighted that all of it was worth it and that I, and the rest of my ward team were successful. Equally important was the fact that the Lib Dem’s maintained control of the council.

The next step was a group meeting where roles were assigned, and as well as many committee roles I became Eastbourne’s first LGBTQ champion and a member of the South Down’s National Park Authority. Suddenly, I had two authority roles with a steep learning curve for each. The next few months were a blur of inductions and training sessions, so much so that I felt like Eastbourne Town Hall had become a second home. The SDNPA meetings and training take place in Midhurst, which for me meant many days leaving the house at 7am and getting home at 7pm. My life now consisted of juggling being a CEO of Volunteers Network, council meetings, events and family life. Not easy, but very rewarding.

By September life had settled into a routine, albeit a hectic one. Between volunteering and work at both authorities I was working more than full time. As in most councils, the expectation is to work around 25hrs a week for an allowance of roughly £50 a week. All the while, many residents would always distrust me now for being one of ‘them’. Add to that being a Liberal Democrat in a predominantly Brexit supporting town!

For me personally, the year was a tough one. Like many children with special educational needs, my daughter was out of school during the year and as well as everything else I was in an ongoing battle with the county council for a school place for her. Eventually, 15hrs a week for a PA was organised until something more permanent could be arranged, but other than that I had to rely on help from my parents to get us both through. In December, I contracted pneumonia and was very ill for six weeks, last month I was isolated due to Covid-19, luckily with mild symptoms. During the last year I also found two houses in Eastbourne I fell in love with, planning to move, but each fell through which added to my stresses. The last one got so close to a moving date I had boxes packed.

Unexpectedly last year, I also became a prospective Parliamentary candidate. I was accepted on a Lib Dem Future Women MP’s weekend which gave me the encouragement I needed to believe I could do it. It’s a challenging process to go through, and when I was approved, general elections were looming. A vague dream became an imminent possibility. I stood in two local selections for PPC, getting to the last three candidates for the hotly contested Lewes seat. I didn’t get chosen, but I surprised myself and loved being grilled on stage by a room full of people. A few years ago, I would have laughed at the idea of me even speaking publicly. I wasn’t selected, but I had great feedback and it made me realise that anything is possible with the right encouragement. I learnt a lot during the process.

So, what have I achieved as a local Councillor? I hope I’ve been useful. I have certainly given my all to it. As a social entrepreneur, I’ve always tried to use my voice to help those who need it and as a councillor I have a louder voice, with the potential to make a bigger difference. My maiden speech was supporting Eastbourne Council’s Carbon Neutral 2030 goal. I’ve contributed to Eastbourne’s whole estate plan in conjunction with the SDNPA which will conserve and enhance Eastbourne’s Downland for future generations. By sitting in committees and using my experience in social care and community work I hope I have been able to influence what we do as a council and how we work. I am part of a team, a committed group who aim to keep everything running well in our town, creating the best environment possible for our residents. I am also working with officers who are dedicated to their roles and recently, during the current crisis, have gone above and beyond to support residents.

I am incredibly proud of how residents, community organisations and the council have worked together during the pandemic to make sure everyone has the support they need. We have been holding weekly Eastbourne Cobra meetings as well as council meetings and sub group meetings supporting local businesses, hoteliers, the street community and the voluntary sector. We may be working from home but all Councillors have been busy during these unprecedented times.

Our Lib Dem group set up an EB Together campaign and has been making calls to vulnerable residents across Eastbourne to make sure they are ok. The team has contacted 5,000 in a few weeks, signposting residents as necessary and making sure those without internet still know how to get help. We have also printed floor stickers to help small grocery shops encourage social distancing. For my part, I set up an East Sussex wide phone befriending service and was overwhelmed by over 200 volunteers coming forward to help. We now have many volunteers making weekly calls to people in isolation and it is making a big difference. One person we are supporting told me yesterday we’d saved his life.

This was not how I expected my first year as a councillor to end and the next year is likely to be very challenging. The pandemic will affect our community for years to come, and as a councillor it will be my job to try to minimise negative impacts and maximise positive ones. Our sense of community has shined through with a real ‘Blitz spirit’ and we need to build on that. Many people have had to reassess the way they work, and with more people at home and less traffic on the roads the environment is flourishing. Grass is being allowed to grow in some places and species of wildflowers not seen for years are starting to appear. Food availability has been a concern, and potentially all of these changes in our perception of what’s possible, offer opportunities to build on exciting projects locally.

Throughout the year, the most important thing that I’ve learnt is that if you push yourself, if you have the right encouragement and if others believe in you, you start to believe in yourself. Before the support of the Campaign for Gender Balance I never would have imagined I could become a PPC, let alone one day maybe an MP. As a single mum on a small income with a complicated home life it seemed impossible. Who knows what the future holds, but after the last year, I know that if any new opportunity arises to serve my community I will just organise my life around that opportunity and go for it.

Given all the issues I’ve been juggling over the last year, I think I did pretty well, and if there is a message from all of this, I hope it is that anyone can become a councillor, it is just a case of making adjustments to your lifestyle. There is no ‘us and them’, just us. If we want government at all levels to be truly representative then we all have a duty to make sure that councils and Parliament are as diverse as we are. Bring on more women, those with disabilities, single parents, the LGBTQ community, people from ethnic minorities and SEND parents. Bring on those living in poverty, the unemployed and the community activists. I tick a few of those boxes, and if I can do it, so can you. See you at the next election I hope?