Councillor Howard Sykes, said: “I wanted to share with you the innovative work Liberal Democrat South Somerset District Council is doing on battery storage. The idea of battery energy storage is simple – batteries store excess energy production during periods of low usage periods and resupply it to the grid when needed at peak times. Solar and wind-powered generation cannot be regulated, and batteries provide the means to store excess production for use when required. This is to go live in March.”

Innovative work which will see South Somerset District Council at the cutting-edge of renewable energy technology is being delivered. The council, in partnership with Somerset-based Opium Power Limited, is creating a new 25MW Energy Storage facility near Taunton to provide essential power management assistance to the National Grid. It will be the largest council-owned battery storage system in the UK and comes as a result of £9.8M of South Somerset District Council investment.

Cllr Henry Hobhouse, the council’s portfolio holder for property and income generation, said: “I am extraordinarily proud and excited to be able to deliver such an important project. We have a vital role to play in caring for our environment and to be able to combine this with our new commercial approach which will see us protect services and become more financially self-sufficient is a great achievement.”

The idea of battery energy storage is simple – batteries store excess energy production during periods of low usage periods and resupply it to the grid when needed at peak times. Solar and wind-powered generation cannot be regulated, and batteries provide the means to store excess production for use when required. The facility being created will provide 25MW of instantly available electrical power on demand to the National Grid. This will be used to balance out fluctuating demands on the local Somerset power grid. Peaks and troughs in demand cause under and oversupply if not correctly managed – this can result in frequency fluctuations that can damage electrical infrastructure.

Since the council purchased the site in May, a fast-moving programme of delivery began including preparing the site following negotiations with local and international suppliers. This includes our partners in this project – Opium Power Ltd working with National Grid, WPD (Western Power Distribution), Kiwi Power, BYD and BSR Connect amongst others. During this time, the new containerised battery units have been built, tested and shipped from China by world-leading energy supplier BYD.  The first batch of battery storage containers arrived in Southampton docks on Sunday 2 December and were delivered to the site a week later. Final connections and operational testing will take place in February for a ‘go-live’ operational date in March 2019.

The project will not only assist the Council’s income generation needs and contribute towards the objectives of our commercial strategy, it also meets its Council Plan commitment to promote the use of green technology. It will additionally aid development in the region in the future by removing some of the electricity supply constraints which can be a barrier to further investment. The Council is additionally working with the award-winning Kiwi Power Ltd to gain advice on the energy auction markets and prepare it for further bids for energy contracts into the future.

Cllr Hobhouse added: “This investment project will bring regular revenue into the council to help continue to provide services to our communities as well as help the region to supply a consistent supply of green energy through the national grid for the future.”

South Somerset District Council is the investor and co-owner of the facility, Opium Power Limited will be the project manager and co-owner, BYD Europe BV will be the battery supplier and BSR Connect is the project rollout connection contractor. Western Power Distribution will be the local distribution network operator. All of our project partners are incredibly excited about the opportunity.

David Owen of Opium Power Limited said: “The launch of this state of the art Battery Energy Storage System at Taunton is perfectly timed. It will coincide with the National Grid preparing to launch a number of new services in the emerging markets created by the System Needs and Product Strategy Consultation. “These services will require almost instant response times, and will therefore not be achievable by other generating sources such as diesel and gas power that currently compete with battery in the marketplace.”

The below photograph shows the site near Taunton being prepared and the battery containers. 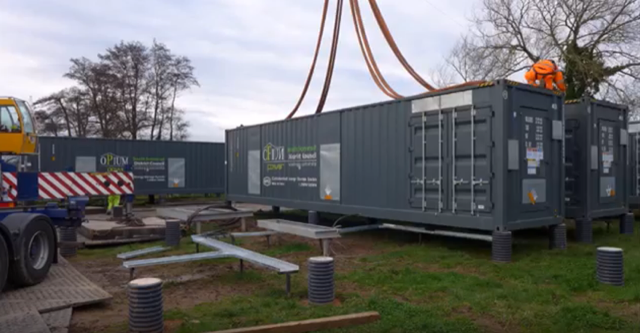