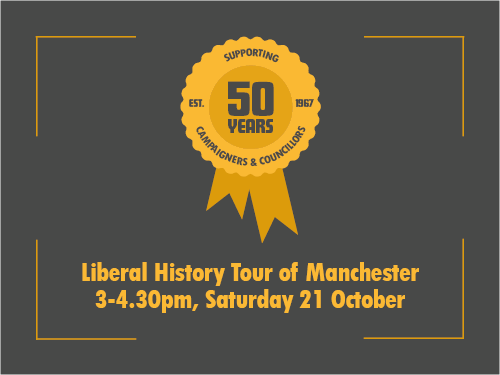 During the day of our 50th Anniversary Dinner on Saturday 21 October, we’re running a Liberal History Tour of Manchester.

Our professional guide will show us around the city centre, giving us a taste of the history, architecture and culture, whilst showing us the major Liberal sights, including:

It will be starting at 3pm in a Central Manchester location (place to be confirmed) and finishing at 4.30pm.

Places are very limited, so please do book your place today for just £15 per person.

It was agreed to send Barnard’s statue to Manchester. The unveiling ceremony in Platt Fields in 1919 was an unashamed celebration of Manchester’s liberal values, emphasising the noble sacrifices made by workers during the cotton famine, a sacrifice which allowed Lincoln to regard Britain as an ally in the Union cause. The plaque referred to ‘Lancashire friendship to the cause for which he lived and died'. In acquiring this new historical meaning, the original purpose of this transatlantic gift was forgotten.

In 1986 the Lincoln statue was moved from Platt Fields to become the focal point of a new public space, Lincoln Square, in the centre of Manchester. It was mounted on a new pedestal on which was engraved extracts from a letter written by Lincoln in 1863 to the working men of Lancashire recognising the sufferings they were undergoing in the war that was to result in the legal abolition of slavery in all of the states of the USA

There is also St Peter's Square site of the Peterloo massacre