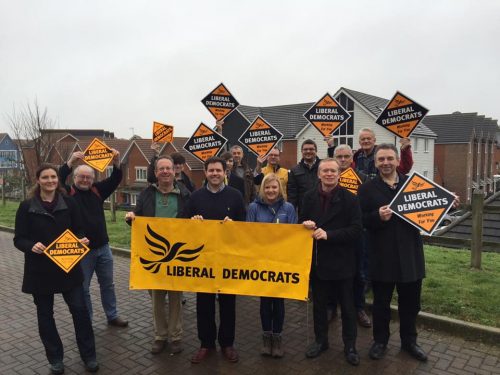 One  remarkable result in this year’s local elections was the gain of the Faversham divsion in Kent. The victor Antony Hook tells how the team, backed by a G8 grant, took a seat where we only got 4% of the vote in 2013 to a win on 43% in 2017.

Faversham is a small town in mid-north Kent, a few miles west of Canterbury, just north of the M2. It’s an old medieval market town probably most famous today for the Shepherd Neame brewery right in the centre. The brewery is both a source of jobs and traffic problems as its lorries navigate the narrow roads.

Just under 15,000 electors live in just over 8,000 households. On most demographic scores it is close to England and Wales’ averages, except it has a significantly lower number of graduates.  Faversham is in Swale, which voted 64% for Leave.

I moved to Faversham in summer 2016 and got involved with the small but keen local party, most of whom were new or newly active. On paper the town appeared solidly Tory. Conservatives had the MP, County Councillor, 6/7 district councillors and 12/14 town councillors. The only non-Conservatives were independents. No Liberal Democrat councillor had been elected since 2011 and no Labour for longer. The MPs’ 2015 vote share was well over 50% and the Liberal Democrat vote in the 2013 county election was just 4%.

Our opportunity to present a new electoral challenge to the status quo came during the winter. A Tory town councillor quit to move to Spain. We went at the by-election with gusto. Two leaflets and a letter from me before Christmas, then two more leaflets and a lot of canvassing before polling day on 19 January. Our literature was all full-colour and designed by me with advice from a former member of party staff.

Our message was “this is a great town that could be even better” and the phrase “better is possible” was used endlessly. We avoided more negative notes like “let down”. The Tories had pledged to spend £1 million on new town council offices and we pointed out lots of ways that money could be spent better. They had hiked up the precept 25% the year before to pay for it. We spoke of “the Tory Tax Sting” with a picture of a scorpion. We pointed out lots of specific ways the money could be used instead “to make life better for everyone who lives here.”

We squeezed Labour with the bar chart of local by-election results across the country. The Tories hardly bothered – putting out one poor leaflet and some token canvassing. Their hold on the town’s elected positions had made them complacent and short of the campaign machine you see in more long-standing marginal areas.

Our aim after that was to win the county seat in May. There was a break of a few weeks while I found my feet as a town councillor. We then launched our county campaign with an A3 Focus across the town. We delivered an addressed residents’ survey and Royal Mail delivered a tabloid.

In April we delivered another A3 and canvassed hard on doorsteps and phone, knocking on about 4,000 doors. We targeted so every postal voter had a knock from us the within two days of the ballots hitting doormats.

We kept the same positive “better is possible” tone as the by-election. The NHS became a major issue due to government threats to Canterbury hospital. Brexit was a background issue. It motivated our members but most voters were not going to vote for us because of opposition to Brexit. We talked about it in the context of the NHS: “hands off our health workers”. Most Leavers are still Leavers but agree EU NHS workers should be allowed to stay.

The Tories really stepped up their game in the last 4 weeks. On polling day at least two Tory MPs, the Leader of Kent County Council and other Tory grandees from across Kent were in Faversham.

The Tories in Kent usually have a big spending advantage over us but in this election we were able to neutralise that by raising what we needed.

I am now enjoying being a part of the newly second largest group at County Hall, developing a Liberal Democrat vision for Kent, working for my division and looking forward to us making more gains in 2021.

Well done Richard! I guess what you did worked, but did you ever get any sense of voter fatigue from all of the leafleting and canvassing?

As the article says, I was the candidate. Richard has posted it on the ALDC blog.

No, we did not find voter fatigue by and large.

This gives hope but more importantly inspires the need to get out and see the voter face to face on a regular basis. In my own very small ward we changed the face of an independent history with the largest personal vote for a County Councillor ever in my ward, elected the first woman as a County Councillor in my ward, the first disabled person and all under a political banner of Lib Dem. It can be done.