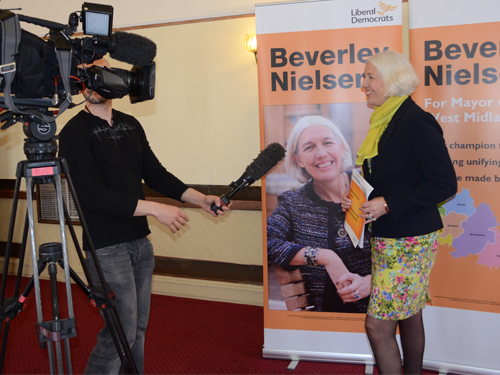 Our excellent mayoral candidates have been launching their campaigns, securing interviews with the BBC and other major news outlets, to help spread the Liberal Democrat message. This visibility helps all of us.

I’ve been so impressed with our candidates’ vision. Jane, Carl, Stephen and Beverley are passionate about changing their regions, so that it better serves the people who live and work there.

Beverley wants to make changes to help retain and get the best outcomes for young people in the West Midlands. She cares about making them proud of their region and committed to building their futures there.

Jane is putting the protection of the greenbelt at the centre of her campaign. Labour and the Conservatives have a plan for housing that will reduce the amenity of the whole region. Jane works for the NHS and is well informed and passionate about how it should be run in the Greater Manchester devolved region.

Stephen is fighting for transport improvements across his West of England region. He wants to build 100,000 homes that are affordable and green. Stephen’s campaign has a real head of steam in a region where the Liberal Democrats have a history of strength.

Carl is leading on improving the connectivity of the Liverpool City Region and protecting and improving local green spaces.

Their programmes for change are impressive and creative, they are truly a departure from the same old solutions the Conservatives and Labour are offering.

We have seen how different the results of elections for the Liberal Democrats have been since the referendum result. Our clear position against the Conservatives’ Hard Brexit is popular. Labour is helpless, and has backed the Conservative Hard Brexit in a vain attempt to retain votes that are abandoning the party in droves.

Our mayoral campaigns have contacted many hundreds of thousand voters already, and there is still much more to be done. Get involved. Contact Charles Glover, ALDC Development Officer (Mayoral Campaigns) to see how you can help: charles.glover@aldc.org.