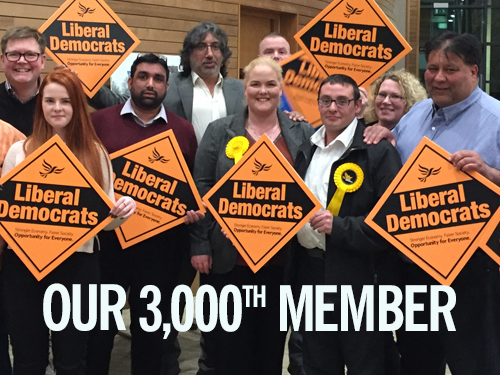 We’re really pleased to announce our membership total has reached 3,000 for the first time outside of a general election.

Cllr Morgan, said: “I’m really pleased to have joined ALDC and to be their 3,000th member is a nice touch. My successful campaign to win last week’s by-election couldn’t have been achieved without the support of my agent organiser, Cllr Mike Smith. His knowledge and experience picked up during his time being an ALDC member, not to mention the templates and advice that he had access to through his membership, were key to me winning. I’d recommend other community campaigners, whether you want to be a councillor or not, should follow suit and join ALDC too.”

Cllr Tim Pickstone, ALDC chief executive, said: “This is the first time ever outside of a General Election campaign that our membership number has topped 3,000. It follows closely behind last week’s exciting news that our past 12 months have been the most successful year for Liberal Democrat by-election results ever with 33 gains. I’m really pleased Cllr Morgan won last week and has joined us to benefit from our advice, resources and training to help her be a real force for good on Aylesbury Vale District Council.”

Susan also wanted to pay tribute to the help and support she received from Neil Fawcett, ALDC development officer; Cllr Steven Lambert; local parties, including Maidenhead, Milton Keynes and Southampton to name a few; and by ALDC’s phone bank on polling day. Her successful campaign saw the Lib Dem share of the vote increase by almost 40%.

If you’re not already a member of ALDC, find out more about our offer and join.