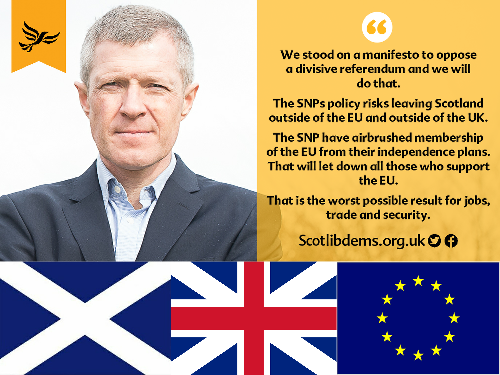 When the Scottish Parliament debates the SNP motion on Section 30 later today, the Scottish Liberal Democrats will table an amendment rejecting the SNP’s referendum, and instead present the positive opportunity to build a strong future for Scotland inside a reformed, federal UK inside the EU.

Our leader Willie Rennie will argue that the Liberal Democrats are the party of the EU across the whole of the UK. That it is absurd for the SNP to put forward a referendum when there is no cast-iron guarantee that Scotland  will be accepted back into the EU. The SNP risk leaving Scotland outside the UK and outside of the EU and are turning their back on their EU voters for their narrow Party ends.

Scottish Liberal Democrats have been at the forefront pressing the case for a reformed, federal, fair and prosperous UK; where the aspirations of the people of Scotland can be met. We have been instrumental in every stage of Scotland’s constitutional journey from the Scottish Constitutional Convention to the 2015 Scotland Act.

By rejecting the siren sounds of nationalism and independence we believe there is an optimistic and modern alternative. The SNP are wrong in their answer to Brexit. We should not be erecting a barrier that will put us out of both the EU and UK single markets. Our belief in the UK and the EU gives us a unique position in Scotland that no other party has.

The Greens have abandoned their manifesto commitment to seek a new mandate from the Scottish people before calling for a second referendum. What happened to their petition of 1 million signatories? Alex Cole-Hamilton MSP slammed the Greens for “airbrushing this commitment from their manifesto”.

Our Party is opposed to a divisive second referendum. Our opposition was stated clearly and categorically in our manifesto for the Holyrood election last year and we will stick to that. The SNP have abandoned their pretence of belief in the sovereignty of the Scottish people and replaced it, in the blink of an eye, for the slimmest, most expedient parliamentary majority they can cobble with the Greens.

They are doing this just when more and more people are coming to the Liberal Democrats’ conclusion that a federal UK will be the strongest and most stable future for Scotland and the UK. On the doorsteps people don’t want another referendum on independence. They want the Scottish Government to tackle the serious problems our country faces: Scotland slipping down the international education rankings. No mental health strategy and a sluggish economy. These are the big issues facing the country not more constitutional diversion and division.