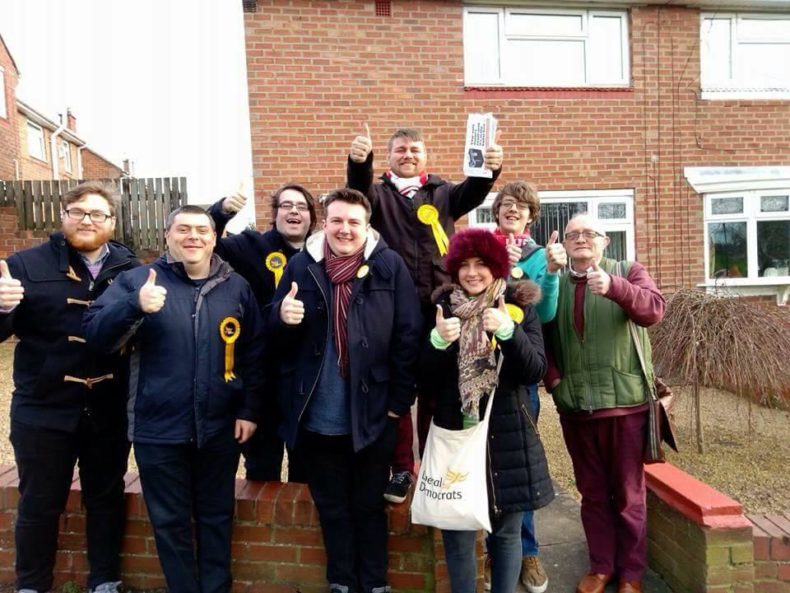 What a set of results to get us set for the busy year ahead. Two fantastic gains resulting in 2 new councillors as well as majority control of Three Rivers District Council! Not even today’s weather can stop the gains!

The overall result confirmed recent trends: it was an excellent night for the Lib Dems with Labour’s support continuing to fall everywhere, including places they’ve taken for granted for a very long time.

In Sunderland, Stephen O’Brien gained a seat from Labour and joins Niall Hodson on the Council, doubling our group size! The gain from Labour came in the Sandhill ward of Sunderland city council in a contest after the disqualification of a Labour councillor for non-attendance.

The teams message was clear – the Lib Dem team will stand up to Labour’s wasteful spending and work hard to get things done for local people. Sunderland is in desperate need of proper representation at the Town Hall, having been taken for granted by Labour for years.

Only the Liberal Democrats can be this strong voice, standing up to Labour’s mismanagement and waste in Sunderland.

As Niall put it, “We had a super candidate in Stephen O’Brien and we have been fighting an extremely vigorous and no-holds barred campaign against Labour. Our support is increasing generously, and Labour are rattled: fighting amongst themselves and struggling to get out any activists whatsoever.

“Our feisty little team had been on the doors for weeks. We have sent out a large amount of literature from us (7+ items).”

For the first time in many years we all made it to 10:30pm without a result from Sunderland.

In Three Rivers, Sara Bedford and the team had an amazing result and now have majority control at the Town Hall. The byelection at the council in Hertfordshire, where county council elections are due in May, followed the death of a Conservative councillor.

Their new Councillor Alex Michaels is currently Chairman of the Parish Council. He has campaigned on a number of local issues, including traffic, speeding, road safety, planning and play areas. He joins an extremely strong and active Lib Dem team with Three Rivers councillors Joy Mann and Chris Whately-Smith, plus County Councillor Sara Bedford.

Neither the Conservatives nor their candidate had any record of campaigning in the ward.

In comparison with the Conservative-run Herts County Council, who have taken funding intended for local school places and youth facilities, Lib Dem run Three Rivers has saved money by cutting administration costs and still has a lower council tax than ten years ago.

If you are on our facebook Sara has done an amazing write up on here views on the by-election which can be seen here. This is a ward where we did have 3 Liberal Democrat councillors in 2014 but we lost a seat to the Tories in 2015. Compared to result in 2015, the Lib Dems vote is up 24% in this ward.

Finally, we also held a seat on Alsager Town Council with a huge 69.9% of the vote. Congratulations to Carrie Pletscher and the team.

Next week sees an election Bromsgrove DC, Norton where a  Conservative Councillor died. Disappointingly there is no Lib Dem candidate. Results like the ones we’re celebrating today should serve as inspiration and a reminder to always stand a candidate.

Next week at 23 New Mount Street wonderful volunteers will be looking forward to by-elections in Rotheram as well as phoning for the Copeland Parliamentary by-election.

A huge thank you to last night’s brilliant team of volunteers who came to 23 New Mount Street in Manchester to make calls at ALDC’s By-election HQ. It’s always good fun with such a lovely team – if you haven’t been yet please come and join our winning team! ALDC’s by-election support and the grants we offer to by-elections are funded through vital fighting fund donations. If you can help us fight in even more wards, please donate here.