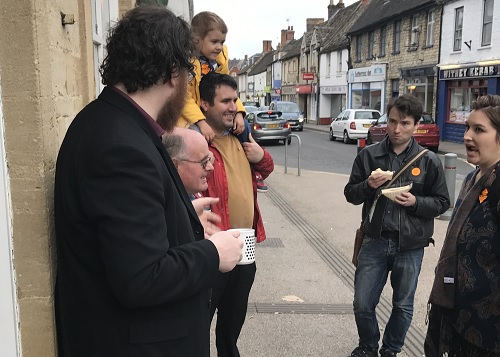 Like many Liberal Democrats I watched parts of the Conservative party conference with horror. A conference where Minister after Minister tried to top UKIP at the xenophobia game. I felt fuming and angry. This time I was going to do something about it. I was going to go to Witney. A few days and a couple hundred miles down the M6, a car load of us from Calderdale arrived. The buzz of the by-election is thrilling, on the first day we were there 400 Liberal Democrats had signed on to help at the HQ. It felt good to be actively campaigning against the government rather than just moaning about it to anyone who would listen.

The canvassing on the doorstep is interesting. The support for all of the political parties seems very soft. I would urge some caution here though. Realistically, overturning David Cameron’s massive majority is a huge ask, and there is still a loyal Tory vote.  But voters were clearly willing to listen to our message and many said they were considering voting for us. Conservatives that had voted remain in the referendum seemed among the most undecided of all voters. In terms of winning these people over a strong candidate certainly helps, but as a party we will need to do a lot more to convince these remain voters from other parties to support us. Labour voters are also open to the possibility of voting for us tactically. Persuading natural Labour voter to vote tactically for us was nigh on impossible in the coalition years. Our strong local campaign on the NHS is giving us credibility here, and the more we are going for the government and the Conservatives nationally, the more inclined Labour voters seem to be towards lending us their vote.

Over the weekends the by-election HQ has been heaving. It was a great experience to meet up with so many Liberal Democrats from across the country. The HQ is also in need of people to go and volunteer during the day as well. If you can spare sometime to go and help them during the weekdays then that would be ideal.

Nobody is pretending that victory is in the bag in Witney, but our strong campaign has clearly established us as the challengers and we are winning people over from all sides.  Our aim from the start has been to get a result that shows that the Lib Dems are back in the game, while the other parties are falling back.  The more support the campaign gets in the final week, the stronger that message will be.