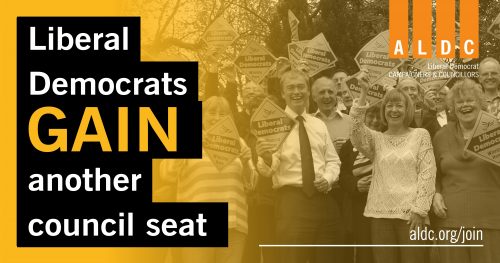 It has been an incredible few weeks for the Lib Dems when it comes to by-elections in local Councils.  All around the country we are fielding more candidates and increasing our vote share.  There have been some truly stonking wins and I have spoken to two teams about their recent success.

Talking to agent Ross Shipman, I asked him what made the team want to work so hard in Tupton.  Ross said;

“Labour are just so arrogant about winning, they really take the area for granted.  From the very first door knocking session, residents were telling us they didn’t feel represented, that no-one ever asked them what they thought.”

Positive feedback spurred the team on in North-East Derbyshire and the candidate David Hancock was soon working to win. The decision was made to put more resources into the by-election and the volume of literature and canvassing was increased.

The feedback from residents was so positive, even before the first leaflet was delivered. Winning felt possible.

Inspired by the hard work of the candidate and the team, people from across the East and West Midlands came to Tupton to help get David across the line.

Third party endorsements from well-known figures in the community and David getting casework from week two, only increased the momentum of the campaign.

The count saw a massive 38.3% swing to the Lib Dems and Labour beaten into second place.

And the fight goes on!

“We are now focusing on parish council by-elections in the area” said Ross. “Labour have taken our area for granted for long enough.” Speaking to campaigner manager, Kathy Pollard, I asked her what gave the Lib Dem Team a winning edge in Hadleigh.

“The local Tories think they can do anything they like and that people will still vote for them! From closing police stations to the public, to moving the council HQ out of Hadleigh and closing the park and ride service, they just don’t care about the people they represent.” said Kathy.

The Conservatives called the by-election very quickly after their councillor was disqualified for non-attendance (it IS difficult to attend when you have moved to America…!).

The Lib Dem Team only had three weekends to make a big impact, including selecting our candidate Trevor Sheldrick. They had a very positive response to calls for help from Lib Dems across Suffolk and beyond.

A resident of Hadleigh for over 40 years, currently mayor and well-known in the community. He was a great candidate who showed the Lib Dems care about the town’s future and the Tories don’t.

Kathy added “Identifying and repeating the major issues was key to winning in Hadleigh. We then used residents’ surveys to verify that these were the issues local people cared about.  The Conservatives had huge teams of people volunteering in the election, but it was too little, too late.”

Hadleigh division was won with a 12% swing with the Conservatives dropping into second place.  To top it all, the by-election win pushes Suffolk County Council into No Overall Control. These two recent by-election stories really do show what we can achieve – huge congratulations to Cllrs Hancock and Sheldrick – and everyone who has worked hard in by elections, win or lose.

Me and my colleagues at ALDC love a by-election and can offer you and your teams the support you need.

Our By-Election Toolkit, leaflet templates, campaign planning tools, Fighting Fund and ALDC Phone Bank are all there to help you to be as successful as you can be.

Keep letting us know about by-elections in your area when they arise and let’s keep electing Lib Dems.

I had a brilliant team. True Lib Dem spirit!