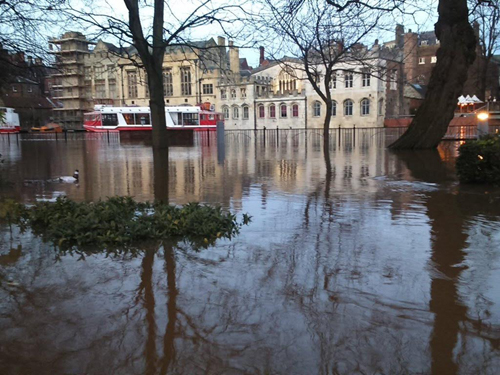 Over recent days the news has been full of images of York underwater. Hundreds of people have been evacuated from their homes after the city’s two rivers burst their banks, flooding houses, shops, businesses and threatening historical buildings. The River Ouse peaked at over 5 metres above its typical level, while the River Foss has hit record heights.

We of course owe a debt of gratitude to all the staff and volunteers from the City of York Council, the emergency services, Environment Agency, armed forces and voluntary organisations, for the hard work they have put in (and continue to do with the clean up) to try to minimise the impact of the floods and assist those affected. After the damage this has caused to our city we must now focus on helping residents and businesses through the cleanup. There are however questions that need to be answered including on the planned levels of investment in both flood defence schemes and maintenance of existing defences.

City of York Council has created dedicated webpages to support residents and businesses affected by flooding, and to help with the city’s recovery. The page is at www.york.gov.uk/flood and our local party has been posting regular updates.

Going forward we must understand why the Foss barrier failed in the city, but there is also the bigger question about the importance we have attributed to flood defence.The starting point has to be to ask whether the planned £2.3 billion investment in new flood defences over the next six years, announced in December 2014, is sufficient. Given the events of recent days, there is a compelling case for more investment to make sure that existing flood defences, such as the Foss barrier, are kept in good working order so that they are ready for action when the need arises. And there needs to be a recognition that the planned capital investment will at the very least need to keep pace with building cost inflation.

I do welcome the statements from the government over providing funding to help York going forward, but with the major task ahead of us in terms of putting right the damage caused by these floods, I will be looking for the offers of support from the government to be quickly backed up with financial detail.

The recent strengthening of the Leeman Road flood defences in York is an example of how we need to bolster defences to be better able to cope with the effects of climate change. It is also especially disappointing to see the government back track on a range of environmental policies that the Liberal Democrats fought for in government.