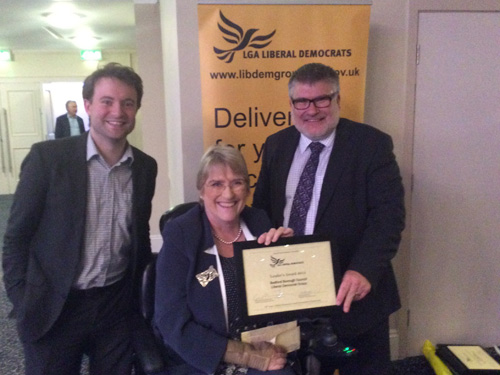 We were proud to have Baroness Sal Brinton, Lib Dem President present the Lib Dem Council Group of the Year Awards at the Local Government Conference in Manchester this weekend. Keep your examples of good practice coming in to rob.banks@local.gov.uk – you too could be in line for an award in the future!

Despite losses of Councillors in 2014 and the MP this year, the group are continuing to campaign hard – identifying key issues which resonate with core Lib Dem values. A good example of this is the work one of their Councillors, with Lib Dem Group support, has done with his borough’s LGBT and HIV/AIDS awareness charities and groups:

This councillor stood for a County Council two years ago, was the subject of a homophobic bullying campaign by a local Tory and refused to give in when faced with a Tory campaign to get rid of him as Parish Council chair. He stood for the District Council and topped the poll, working with his running mate to win two Conservative seats. If he had not done that there was no way the Lib Dems could be in a position to continue, with the support of Independents, to control their District Council.

They successfully retained the Mayoralty and held 9 council seats.

Some great pro-active work over issues like the Peace Pledge, (all signatory councils have to pledge to build peace on the ground in their communities), holding Labour to account over plans to reduce the chance for the opposition to ask questions, and have been campaigning inside the council and outside of it on the issue of food poverty and on benefit sanctions.
Congratulations to all winners!