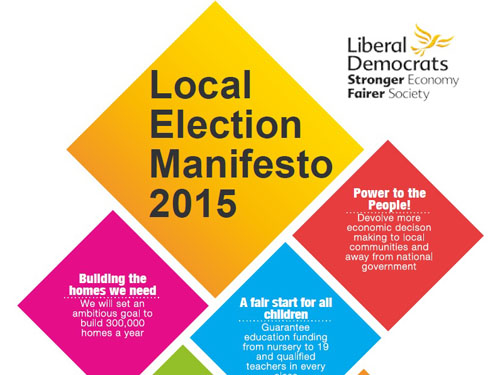 In a message to Lib Dem councillors and campaigners across the country, they write:

Please find below the Lib Dem Local Government Manifesto. This is to highlight the relevant parts of the Lib Dem manifesto, launched last week, that affect local government. As the coverage of the national elections becomes more prominent, we wanted to do this to stress the importance of the local government elections on May 7th.

The document we’re launching represents the huge amount of work that local councillors have done within the party to produce – not just warm words but a serious set of policies about our local communities.

We can show anyone that cares about their local services that the Liberal Democrats will back their community to boost its local economy, work hard on environmental issues and improve their services for their vulnerable and elderly residents.

Our councillors and their residents will be particularly pleased to see commitments to integrate health and social care budgets so that people can decide locally where best to commission care; to put councils in the driving seat of delivering the homes we need with plans for 15 years’ worth of local housing and the flexibility to borrow to build social housing; to reaffirm the liberal democrat vision for education where professional freedom is combined with democratic accountability so that the local community has the final say on local schools; to build on the success of city deals and other devolution that has been driven by the Liberal Democrats in the previous parliament – bringing together a myriad of funding streams going into a local area to help with the economy, transport and back-to-work schemes.

Finally, local people will be pleased to see that a local government with these new powers will have to answer to them through a fairer and more rigorous voting system than the current one which affords complacency in so many one-party states around the country.

We wish everyone fighting the election campaign – be it local or national – the very best of luck in the coming weeks.”

You can download a copy of the manifesto here.