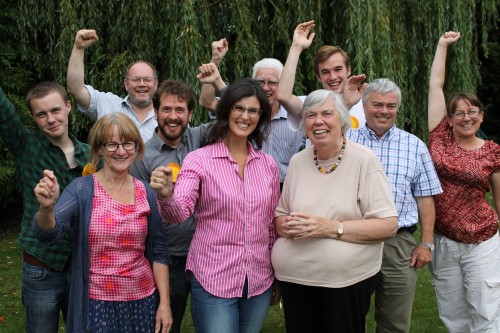 My last two Build Up Blog posts have been about how to run petitions and get the most out of them in our campaigning.

In our recent by-election campaign in Dunmore Ward in Abingdon, running a petition campaign about changes to a local roundabout played a big role in achieving a 10% swing from the Conservatives.

In October 2013 the Cabinet Member responsible for highways on Oxfordshire County Council gave the go-ahead for major changes to the roundabout at the top of Wootton Road in Abingdon on the distributor road round the north of the town.

The aim was to improve cycle safety at the notoriously dangerous junction, although local cycle groups objected strongly to the proposals, arguing that they would do no such thing.

The changes were made in the early summer of this year, and have not only resulted in no obvious improvements for cyclists, but have increased the length of queues at the roundabout for traffic. As the work was being finished on the roundabout, our district councillor for the ward next to it resigned as she was moving away.

We started our campaign with a ‘knock and drop’ survey of the ward, which included a petition on another big local issue, plans by the district council to build piecemeal on the local Green Belt.

The Green Belt petition was very popular, but it became very clear from listening to residents on the doorstep that the increased queues caused by the new roundabout layout were already causing major problems.

As a result of this feedback we decided to start a campaign to get the Conservative County Councillor responsible to review the changes and think again.

We led on the issue in the next Focus, the first of the election period, along with a petition slip, establishing our candidate Margaret Crick as the leader of the campaign. We also went door to door in the part of the ward nearest to the roundabout.

We set the petition up on our website and as many people have signed online as on paper.

The response was very positive. We found many people who were directly affected by the problem, and nearly everybody knew someone who was.

It quickly became clear that this issue should become one of the main planks of the by-election campaign – a clear cut case of the Tories getting something badly wrong and Margaret campaigning with and on behalf of local people to get the situation improved.

The next Focus led on the massive response to the petition, reinforcing the message and encouraging more to sign. We also included the petition in the Calling Leaflet.

A few hundred people in the ward had signed previous petitions on traffic related issues so Margaret also wrote to them, reminding them of these previous campaigns, and asking them to sign this one.

By the end of the campaign we had established a very strong position on three key issues, of which the Roundabout was one. Each of them provided a clear differentiation of us from the Tories.

The Eve of Poll to Switch voters (Blue Lib Dems and Yellow Cons in Connect terms) was designed to be opened by Conservative inclined voters and to set out clearly why they should vote for Margaret on the basis of those issues. Other target literature in the last few days of the campaign also promoted the campaign.

During polling day it was very clear that the campaign had worked, and that all three of the main issues we had campaigned on resonated. There was very strong recognition of Margaret as a candidate who would campaign effectively for the ward.

The campaign isn’t over yet!

Target letters are now going our across the rest of North Abingdon promoting the petition and it will feature in our forthcoming campaign newspaper.

We are currently deciding which County Council meeting to present the petition to. Depending on the response, this campaign may run and run.