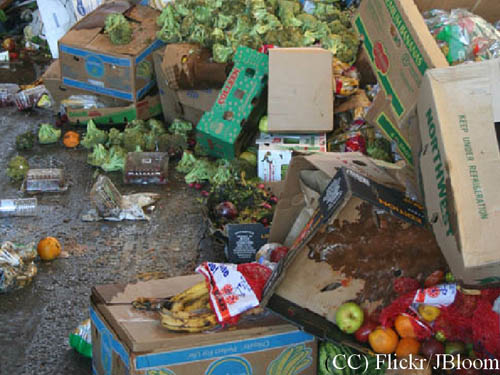 I cannot be the only Liberal Democrat who was appalled by the scale of the food waste which had been calculated earlier this week by our largest food supplier, Tesco.

Similarly I cannot be the only Lib Dem councillor who doesn’t experience ‘bins and bin collection’ as a constant issue with local residents. (Too many, too full, not often enough etc etc). Yet the link between Tesco’s food waste and the waste collection and disposal services provided by our local authorities wasn’t made in the coverage on food waste this week.

Tesco is clearly responsible for its own waste (the cost of which is no doubt a very significant driver in its enthusiasm to reduce it). But it is us, the local authorities, who have to dispose of all those uneaten apples and crusty baps. Not only that, but we’re also expected to dispose of the ridiculous level of packaging that surrounds almost every item of food we now consume – much of which (anything from cartons to soft plastics) is not recyclable in the doorstep collection in many areas.

Supermarkets have a lot to answer for in this waste mountain, but we’ve also made it easy. We’ve provided people with bigger and bigger bins to put the most bulky packaging in (cardboard, bottles, plastic bottles etc). The system rewards us for the tonnage of packaging we collect. Most of us are now providing huge bins for organic waste to put all that uneaten food in.

We feel good that our residents’ cardboard is recycled, as their glass and plastic. We feel even better when we turn all their food waste into garden compost and sell it back to them. But all of this costs money, and more importantly it is a huge energy and carbon producing industry of bins, bin lorries, processing and re-making which, if we think rationally, is not sustainable.

Well done Tesco for making a start on this problem. The next great step will be to get them, and ourselves, to tackle packaging. Even better copy our sensible European neighbours who sell things in re-usable containers (I am old enough to remember my mother saving my Ribena bottle to take it back to the shop in return for a few pence.)

But Tesco can only go so far. As politicians we have a role in leading a change in society. The last few decades have been all about recycling. We’ve won that argument hands down. The next few decades need to be about a massive reduction in waste.

Bromley London Boro Council collects waste food every week in a special locking bin for composting. At the same time paper as well. One side of the vehickle takes paper & the other the waste. That also allows for ordinary household waste to be collected fortnightly as are glass, plastics etc. Food does include peelings, banana skins as well & means it is all recycled & not dumped in tips.

Come and see us at Conference!