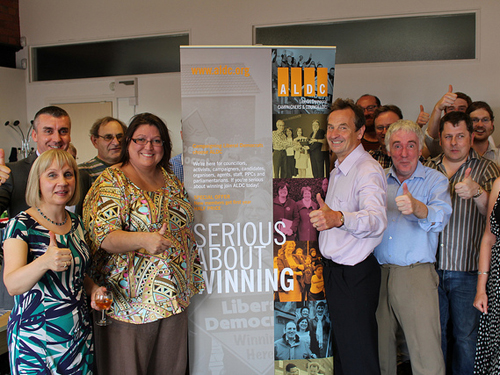 Chris was joined by ALDC Chair Cllr Claire Hudson, the Manchester-based staff of ALDC and a selection of councillors and campaigners from across the region to take a look at the new facilities and to toast ALDC’s future success.

We’d like to thank all of our guests (who braved our small offices on a hot day!) for their support, we hope everyone had as much fun as we did christening our new HQ!

A selection of photographs from the event are available on our Flickr photostream.

ALDC moved its headquarters in May 2013 to city centre Manchester from our former base at the Birchcliffe Centre in Hebden Bridge, West Yorkshire.

The Birchcliffe Centre was our home from 1977 when the Joseph Rowntree Reform Trust, an organisation that ALDC (and ALC before it) was to have a long and continuing relationship, invited the the Association to be housed in a recently aquired former Baptist chapel.

37 years later it was time to move on to make sure ALDC was best placed to help Lib Dem campaigners and councillors succeed in the years to come. Our new base in city centre Manchester provides capacity for around ten staff and volunteers to work in our main office, together with separate meeting room and office.

The building we’ve moved to links us back to another organisation that ALDC has had a long and continuing relationship – the Co-operative.

As the city grew in the 19th century the area became synonymous with slums and poverty. At its ‘height’ in 1849 20-30,000 people, mostly Irish immigrants, were crammed into a small area described by a then journalist: “The lowest, most filthy, most unhealthy and most wicked locality in Manchester is called, singularly enough, ‘Angel-meadow.’ It is full of cellars and inhabited by prostitutes, their bullies, thieves, cadgers, vagrants, tramps and, in the very worst sties of filth and darkness…..”

Angel Meadow also played its part in shaping political thought. A young Frederick Engels was heavily influenced by what he saw her: “Such is the Old Town of Manchester.. and the frightful condition of this Hell upon Earth. Everything here arouses horror and indignation” (State of the Working Class in England 1844.)

150 years later the world, in some respects, has moved on and today we’re surrounded by city centre apartments, creative industries and just over the road Manchester’s hip and trendy Northern Quarter.

Do come and visit us next time you’re in Manchester and make the most of this as a great resource for the Party ‘up North’.