The Party President Ros Scott along with Daniel Bridgeman (from the sponsors Midshires and Riso) presented this year’s Campaigner Awards at a packed meeting at the Federal Conference in Liverpool. 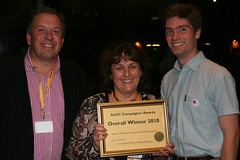 This year’s Campaigner Awards attracted an ever-improving quality of entries with the overall winner coming from Bath & North East Somerset Radstock Ward, who took the seat with 40.1% of the vote share after not having a candidate in May, and indeed Simon Allen is the first Liberal Democrat elected in the town. See the literature here. (ALDC members should log in first before seeing this link!)

The Best Membership Literature winner was Monmouthshire with the Highly Commended going to Watford, the improvement in this section is very noticeable and will we are sure increase the readership of the newsletters.

The Merton team won the best literature by a volunteer campaigner with the highly commended award going to Meon Valley for their Owslebury & Curdridge ward campaign literature.

Sutton won the best ward campaign for their campaigns in the local elections May that resulted in eleven gains, which was against the odds in London, the highly commended went to the Shepton West ward by-election campaign that won with a swing of 17.8% to take the seat from the Tories.

The team from the Aldbury & Wigginton ward of Dacorum council won the best direct mail category with a good collection of direct mail that made the case to vote for the Liberal Democrats resulting in a 28% swing from the Cons to us and reducing Labour down to only 18 votes. The highly commended award went to the Fylde team in their campaign in the Kilnhouse ward that resulted in the Tories losing another seat to us with a 21.9% swing against them.

The best focus winners, after a very hard selection, went the Burnage team in the Withington ward, this is part of John Leech MP’s area, the highly commended went to the Vassall ward of Lambeth for a hard hitting leaflet that showed that Labour had left Lambeth Derelict.

We will be featuring the other winners and highly commended literature over the next few weeks.

Best Literature by a Volunteer Campaigner

Photos of all the winners are on our Flickr site here.