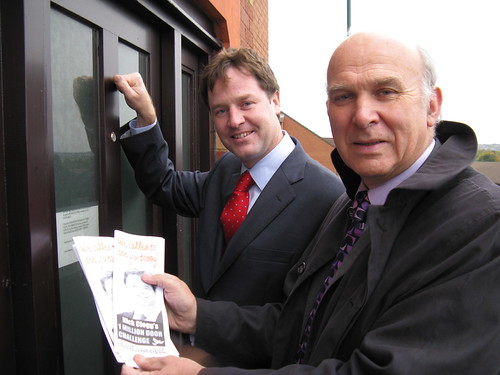 There are more “old wives tales” told about canvassing than probably any other political subject. Most previous Lib Dem guides used to have a simply a flow chart or crib sheet. These are essential and should be amended for local circumstances but don’t perhaps tell the whole story . Here we describe why we say what we do on the doorstep.
The crib sheet you should have with you will give you suggested wording for the doorstep but it is not essential that you get the words “right” every time. However if you do stick to the script you’ll not go far wrong. It’s more important to actually get onto the doorstep and start than worry too much about the odd fluffed line.Who
The first thing we are trying to do is identify who we’re talking to. To do this we make a best first guess. Pause before walking to the household door to look at who’s on the register at the house. On the EARs canvas card names are listed surname first with horizontal lines between houses. If the person who answers the door is male, pick the most likely male name for that house. If there’s more than one male name you can often have an informed guess  – for instance Wayne is likely to be younger than Albert. If you’ve guessed correctly (and you often will) the householder will be slightly on the back foot often wondering how you  –  a stranger – know their name. This gives you a chance to deliver your short “spiel”.  If you get it wrong, try other male names in the household till you get it right. Don’t say “is it Mr Brown?” as Mr Brown could, for instance, be a relation and not anyone on the register at that address, so use full names.  Perhaps“Is it Roger Brown?”
Or  just  “Roger Brown?”
Or “Good Evening …..Roger Brown?”
If they are not on the register there are 3 things you need to do
1.    speak to anybody else in the household who is on the register.
2.    establish if they’ve recently moved to the property was it from an address in the ward or constituency (they may well not know this – you’ll need to use your knowledge of the ward/ constituency to decide from their previous address.) If they have, then without the immediate need to re-register  at their current address they can still vote using their previous registration. If they are supporters remind them that though the polling card will be sent to their previous address it’s not necessary to vote. All they need is to be on the register and they can go to their normal polling station as usual
3.    The best option (particularly if they support us) is give them a Registration form (that you’d have with you) to go on the electoral roll at that address – this can be done up to and including Thursday 14th April 2011. If they’re reluctant remind them that banks use the register to confirm addresses when bank accounts etc are being opened.
4.    Remember even if they’re not eligible to vote in this election but they support us they could still put as poster, deliver or help.
Once you’ve established who they are and that they are on the register at that address, move on to who we are.Who are we
“I am calling on behalf the FRED BLOGS (insert name of cnaiddate as appropriate) the  Liberal Democrat candidate for Happytown (the area your canvassing) in the council elections on May 5th”  –  in a joint election replace the name of the candidates with “Liberal Democrats”

If you are the candidate then:
My name is Fred Bloggs and I’m the Liberal Democrat candidate in the council elections on May 5th”
It‘s very important to get across that we’re the Lib Dems. It may be obvious to us but the public need it spelt out. So say it as often as you can, wear rosettes etc . Name the date of the election rather than “forthcoming” as if they know they are going to be away postal votes or proxies can be organized.  Do you mind if I ask how you will be voting?”
Or “Have you decided how you voting on May 5th?
It is important not to use leading (“closed”) questions like “will you be supporting us?”  – they only invite a “yes” to get us off the doorstep rather than an honest answer. Off course early in the campaign many will respond that they have not decided yet. People are usually reluctant to commit (though it’s a very good sign if they do).
Normally if the do respond with  “I don’t know yet” follow it up with“Well how did you vote last time?”
or “Do you mind if I ask who you supported last time?”
or “Who would you usually support”

or even “Is there someone you definitely wouldn’t support”
for the householder this is easier as it’s a fact and a matter of memory not a decision which feels difficult, intrusive and most voters will usually tell you.

If they say they supported us last time we would normally have recorded them as a probable for this forthcoming election. In the current political climate this may not be wise. Some will use “I’ve not decided as a less confrontational way of saying I’v e switched or I’m not planning to vote.

It is better then to record in EARS that there voters voted for us in the last election if it was not already recorded ( a little complicated to do but at least accurate).  Do not enter anything in the canvas field for this election but perhaps flag them for further work to firm them up.

If they do tell you how they’re intending to vote, ask them how they intend to vote in the AV referendum. If they have voted for another party in the past and they say they might switch to us do not put them down as “probables” but as “Soft Labour” (or whichever party they are swinging from). This should ensure they get the correctly targeted literature to help to seal the deal.
For those voting for Tories nationally but the Lib Dems locally record them also as “soft Tory” so they get the right materials (usually targeted mail) as the campaign progresses.
Record the responses on your canvass card in the appropriate column.  Please do not use any other codes.  If you need to make some notes please make sure they are clear and legible.  See separate note on the canvass categories to use.
Remember your task is to find out how each elector is voting – not to get involved in long discussions about policy.  Make a note of any elector requiring policy information – this can be sent later or offer to call them back later in the evening when its dark. This
a)    collects an accurate phone number
b)    gives you a chance to research our stance on the issue and
c)    does not waste valuable daylight doorstep time.

For those supporting other parties do not attempt to persuade them. We are identifying support not converting it –  that’s what the literature is for. However it’s usually worth leaving them with a campaign specific message. For 3rd and 4th party support this might be a squeeze message such as:“You realise that the Tories came a poor third here last time. It’s a straight fight between us and Labour”  but they should listed on your prompts sheet.
Thank Liberal Democrat supporters for their support.  Ask if they would be willing to help the campaign by putting up a poster. If possible try to put it up for them immediately.  Posters need to be in windows – not sat on mantlepieces!
Ask about every elector in the house.  Mark voting intentions for each individual elector on your canvass card.  DO NOT assume that everyone in the house votes the same way.
If the elector is under 25, over 60 or has school age children them make a note in the Age column on the left hand side of the card.  If they express an interest in a particular issue then please also make a note of that.
Try to avoid offering lifts to old and infirm supporters as this will take a lot of polling day resources to deliver but if you do, make a note of the best time to call and get a phone number so it can be confirmed on polling day. If we are not plannning to run a polling day noperation int the ward do not offer lifts!! Instead encourage them to get postal or proxy votes and bring the forms for this with you.
Leave a calling leaflet (see template links below) with each household whether someone is in or not.
Please return your canvass cards to the committee room when you have finished

Remember you must download and install Helvetica Neue FIRST to use these templates – otherwise they’ll look daft!