Three things happened at Christmas which I found depressing. Firstly, after explicit instructions to the contrary, a relative who shall remain nameless (though not blameless…) purchased for me the DVD of Michael McIntyre’s stand up comedy tour, despite me finding him about as funny as a compound fracture. Second, the Christmas turkey was woefully mis-cooked despite my best efforts. And finally, every day for a week either side of the big day I was on the receiving end of ever-angrier phone calls from residents busy tumbling about on icy pavements and falling head first into snow drifts.

The first two of these problems have been sorted. Oxfam have benefitted from the DVD, and next year I’ll have a frozen ready meal for one and go back to bed. But the problem of what to do when it snows remains, because as an opposition Councillor it puts me in a quandary.

Opposition Councillors have three roles – to scrutinise the Executive, to lead communities, and to represent the people in their wards. It’s all fine and dandy when all those things pull in the same direction. When the Executive want to close down our library, we can represent the will of the community and lead the campaign to keep it open, whilst working at the Town Hall to scrutinise the whole thing. But when it snows outside and the Council keep all the main roads open, how can a good Councillor perform all three of his roles when there’s a bloke on the phone threatening to lob snowballs through his window unless a gritter is sent down his cul-de-sac before lunchtime? 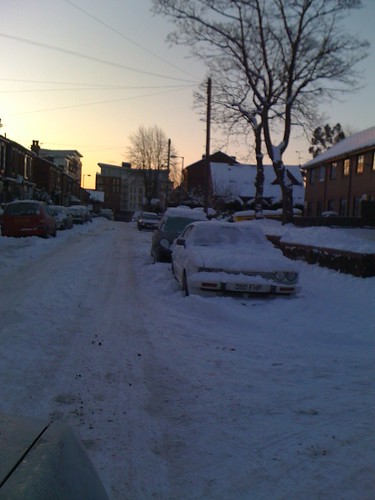 It’s a tough one, made harder still because taking a stand against a resident you think is being unreasonable might be risky in electoral terms. It’s all well and good explaining to the angry man on the phone that five new gritting trucks would mean a million pound Council Tax rise, but it often doesn’t work. And if he turns out to have lots of friends, lots of money and access to a leaflet-printing machine, then we may have a problem on our hands come election day.

At times like these I always like to turn to the book of football clichés for advice. It works for election nights, when I am always reminded of the phrase “A Game of Two Halves” before they start counting the postal votes and we snatch victory from the jaws of defeat (or vice versa). For this problem, I have chosen the old adage “Form is temporary but class is permanent.” As Councillors, we all won the last election, so our form is good. But what’s the point of winning if we have to lie to voters to keep them on side? There are times when some home truths are necessary – and for me the snowy weather was one of them. Yes, it’s annoying that not every side-street gets gritted and that the pavements are slippy for a couple of weeks. But on the whole Councils have done OK, and it’s a good lesson in priorities and tough choices. As opposition Councillors we can promise to do two things – make very sure that everything was done right, and where it wasn’t make sure it’s done right next time. Beyond that, we weren’t elected as nannies, so we’re all in this together.